Farrell Morris is listed in the credits for the following albums: 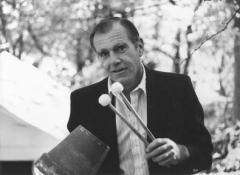 Nashville percussionist Richard Farrell Morris died on Thursday, October 4, 2012, after a long battle with lung cancer. He was seventy-four. Farrell Morris, born June 17, 1938 in Waxahachie, TX, was a former member of the Nashville Symphony Orchestra and spent many years as a Nashville studio musician. He first began working in Nashville studios in the late 1960s, and by the early 1970s was contributing to landmark albums, including Dan Fogelberg’s Home Free, Kris Kristofferson’s The Silver Tongued Devil and I, and Mickey Newbury’s Frisco. Mr. Morris was an in-demand session player through the 1970s, ’80s, and ’90s, working with the likes of Johnny Cash, J.J. Cale, Kenny Chesney, George Jones, Dolly Parton, and numerous others. In the studio, Morris’s percussion parts were known to add rhythmic sophistication as he shifted from hand drums to vibraphone to bells and to whatever else might be needed. His style of playing was responsible for making songs that had been written in well-worn rhythmic structures sound complex and complete.

In 1979, Farrell released his own LP album, Bits of Percussion and Jazz, which featured Farrell on vibes and percussion, Stan Getz on tenor sax, Ron Carter on acoustic bass, Kenny Malone on drums, Randy Goodrum on piano, Shane Keister on pianos and synth, Craig Nelson on basses, Billy Puett on flute and saxophone, Denis Solee on flute and alto sax, George Tidwell on trumpet and flugelhorn, and Buddy Spicher on violin and viola. Farrell Morris was also an educator, teaching at the Blair School of Music at Vanderbilt University in Nashville. Upon his retirement from the music business, Morris worked as a visual artist, creating idiosyncratic works that combined sculpture and musical subjects. His work was exhibited at Nashville’s Local Color Gallery and also at galleries in Las Vegas, Dallas, and Louisville.