Phil Naish is listed in the credits for the following albums: 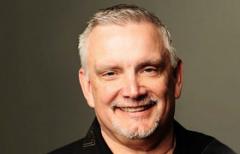 Behind the driving radio singles of Steven Curtis Chapman to the melodious sounds of the London Session Orchestra accompanying such artists as Steve Green and Michael Card, you will find producer, songwriter, studio musician, Phil Naish.

Having begun keyboard instruction at the age of 5 under the tutelage of his musician mother, Phil Naish quickly became an adept pianist. From piano he moved toward the cello, studying privately for 8 years and becoming a member of the South Florida Youth Symphony and the Young Artists Baroque Society of Greater Miami. His cello ability earned him a scholarship to Belmont College (now Belmont University). An injured finger ended his cello career which nudged him back into his earlier love – piano.

For three years he was a keyboard player and guitarist for the Belmont Reasons, a public relations touring group. Phil earned a Bachelor of Business Administration with a concentration in Music Business. This degree was invaluable in helping Phil learn the studio process from the inside out.

Phil Naish began his career as a studio keyboard player for the likes of Sandy Patti, Steve Green, Boz Scaggs, Dolly Parton, Beth Nielson Chapman – invaluable training which ultimately led to Phil’s successful production career. It was at this time that he began a seven-album relationship with Steven Curtis Chapman during which three Grammy Awards were won plus numerous Dove Awards. During Phil’s career he has also produced Point of Grace, Carman, Jaci Valesquez, Steve Green, Michael Card, David Phelps, The Martins, Jonathan Pierce, Wes King and Geoff Moore and the Distance. Several of these have gone on to be Gold and Platinum albums.

Phil Naish understands music. His knowledge includes all aspects and styles of music. He knows how to produce the definitive album. With a proven track record Phil Naish takes the greatest pleasure in giving artists and their songs the best possible vehicle to communicate their heart with the audience.

Websites:
Website: PhilNaish.com
Facebook: Phil.Naish.7
External links are provided for reference purposes. Christian Music Archive is not responsible for the content of external internet sites.
Created by: siremidor on 26-July-2010 - Last Edited by siremidor on 15-October-2019