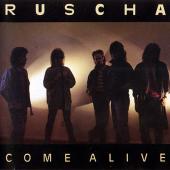 Ruscha was a Christian rock band formed in the mid-1980s, by two Siberian immigrant brothers Nikolai R. Pankratz and Peter Pankratz who escaped Communist Russia, then testified to the plight of their fellow believers after safely reaching the USA, where they formed a band at Liberty University in VA.

At first, the band released two albums under the name "The Russians" (The Russians, I Want To Talk To You & Love Forever More).

The band underwent a name change for the third album called "Ruscha" in 1987 and released Come Alive in 1988. The album included songs such as "Come Home", "Come Alive", "The Word Stands Forever" and several others which charted on the Christian radio stations in the US in 1988.[1] The original album has been out of print, but a CD was re-issued in 1996 on an import label (Victor Entertainment, Inc. in Tokyo, Japan) and later in 2012 by Nikolai R. Pankratz. These newer versions didn't have the printed lyrics the US original version had but does have all the same songs in English and cover art.

Their fourth album was "Ruscha" Invisible Hands in 1992. This album was very rare because it was entirely sung in Russian.

In 2012 Nikolai R. Pankratz turned back the clock and released 5 more Cds called "The Russian Classics" reaching back into the 70s when Nikolai and Pater first left the Soviet Union. These were the earliest and first-ever gospel recordings made in the Russian language for the Russian speaking community living behind the iron curtain. The songs were aired by way of short wave radio into Russia through organizations such as Earl Poysti [ru] (RCR), Alex Leonovich (SMS), Peter Deyneka (SGA), BBC, Voice of America and many others and became popular among the Slavic people. The songs are in the Russian hymnals and until this day are sung, recorded and re-recorded by many.

Three of the members of Ruscha (Andy Denton, Mike Jacobs, & Billy Williams) went on to form Legend Seven in 1990 by Word Records. Andy Denton created the two solo albums Midnight Of Hope in 1999 by KMG Records (Nashville, TN), and 50 Years From Now. Andy Denton was also half of Identical Strangers (Damascus Road Records) with Randy Thomas (Allies & co-writer of Butterfly Kisses (song)) in 1995.