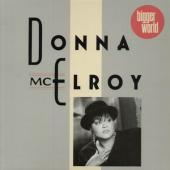 Donna McElroy is listed in the credits for the following albums: 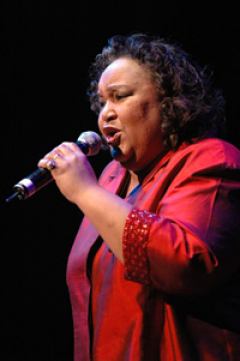 When Donna McElroy left Louisville, KY, in 1973, a young talented voice scholarship recipient (Fisk University-'77), she never dreamed her days in Nashville, TN, would be many and very rewarding. First she and her friend Vicki Hampton took all the natural talent and great ears they'd been gifted with growing up and started doing demos and backup sessions, bringing a new sound to the Music City vocalist pool. In a short while they'd dived on in and twenty-two years later, and after helping to make such hits as "Why Haven't I Heard From You?" (Reba), "Baby, Baby" (Amy Grant), and "Addicted Love" (Bebe & Cece), Donna signed briefly with Nashville's Warner-Reprise label, "discovered" by old friend and client, Jim Ed Norman. After nearly two years of learning the ropes, Donna realized she knew nothing of being an artist, and the road gigs she'd been on had spoiled her for starting as a new artist. She'd forgotten as a backup singer for Amy Grant's early days on the road, how much sacrifice the artist and band have to make. She was demanding and expected the top of the line for product which hadn't proved anything yet. Poor record sales made Donna long for the days when she could just sing and not have to be any particular kind of singer. She realized that the music she'd always been the most comfortable with from her days growing up and listening to her dad's record library, was jazz.

So in 1993-94, when she'd been released from her contractual arrangement with Warner, Donna met Lori Mechem and Roger Spencer, two musicians who hailed from Anderson, IN, and were new to Music City. Having begun writing jazz songs with Billy Adair while signed, Donna had gotten the bug, as it were, and over the next four years wrote with Lori, Billy Crockett, John Aarn, Chris Mueller, and other great songwriters in Nashville.

Richard Evans, Professor of Creative Writing and Production at the prestigious Berklee College of Music in Boston, heard some of those songs after inviting Donna to speak and being politely turned down.

"I would have nothing positive to say about the industry." was all Donna could reply when she received Richard's call, still slightly disappointed in her short run as a recording artist. "But I'll send you a cassette of some of my tunes". And the rest, as they say, is history. Richard played the tape for Jan Shapiro, soon-to-be chair of the Voice Department; Jan recorded two of the songs on her CD, then asked Donna to consider coming to help buld the Voice Department at Berklee.

Relocating to Boston to begin teaching was the most productive and rewarding thing that could have happened to Donna. She's now been able to teach; not only how to sing healthily and correctly, always referring to her own voice instructor back at Fisk, Valija Bumbulis, and her first voice instructor, her mother, who still lives in Louisville; but how to build on a dream and plan one's career as well. Not to mention performance skills and knowledge of the whole spectrum of stage experience she's had over the years. Donna and Berklee seem to be the perfect match.

So when the opportunity came to develop a kind of teaching tool to show new artists that they can do much of the work themselves, and benefit from their own production, networking, marketing, and accounting skills, the result was "Fly To Forever". Definitely Jazz, definitely Art, and definitely Donna McElroy!