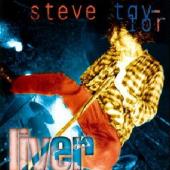 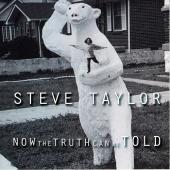 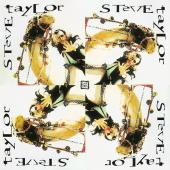 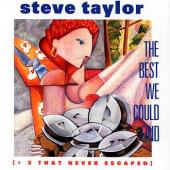 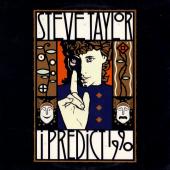 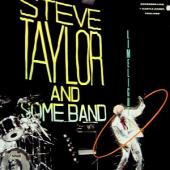 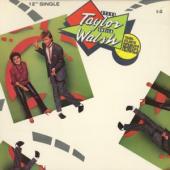 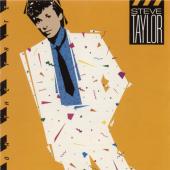 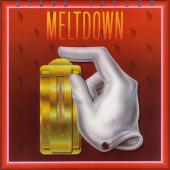 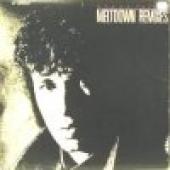 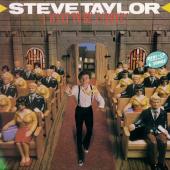 Steve Taylor is listed in the credits for the following albums: 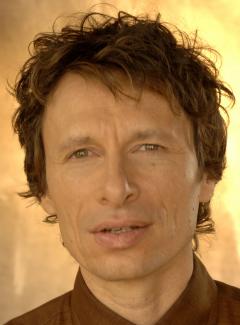 Steve Taylor has been a member of:

Roland Stephen Taylor is an American Christian singer, songwriter, record producer and film director. The eldest of three children, Steve was born in Brawley, California. Taylor's father, Roland Taylor, was a Baptist minister. When Taylor was six years old, the family relocated to Northglenn, Colorado, a suburb of Denver. He graduated from Northglenn High School in 1976. While there, he attempted to learn the bass guitar, piano and trombone.

Upon graduation from high school, Taylor enrolled at Biola University in California. During his freshman year, he was first of the 100 chosen, from 20,000 applicants, to spend the summer at John Davidson's summer camp. At the camp, Taylor spent time learning from singers like Tony Orlando, Florence Henderson, and John Davidson. Also that year, Taylor heard one of his biggest influences, The Clash's London Calling. "It saved my life, musically," said Taylor.

Taylor returned home and enrolled at the University of Colorado at Boulder, to study "serious music". He graduated there in 1980, but described his Bachelor of Arts Degree in Music and Theater as being worth "slightly more than the cash value of a Pizza Hut coupon."

1980s
In 1980, Taylor wrote and directed a pop musical comedy titled Nothing To Lose based on the story of the prodigal son from the Bible. It had a short run at a community theater in Denver. He also wrote and starred in a short film, Joe's Distributing, a parody of avant-garde films. Taylor wrote articles during this time that were published in the Wittenburg Door and Contemporary Christian Music magazine (for which he won an award from the Evangelical Press Association).

After recording a demo of original songs, Taylor began to write for the musical group The Continentals. The Continentals' founder, Cam Floria invited Taylor to join the group on a tour of Poland sponsored by Solidarity. When he returned to the United States, he was asked to perform at the Christian Artists' 1982 Music Seminar in Denver. Billy Ray Hearn, president of Sparrow Records, was backstage and immediately signed Taylor to a recording contract. He recorded his debut solo project I Want to Be a Clone in 1982 and released it in January 1983. He quickly gained a reputation for writing songs that satirized beliefs and practices with which he disagreed.

In 1983, Taylor recorded his first full length album. Released in 1984, Meltdown included some of the demo material that was not on Clone along with some new material. His video single of the title track, "Meltdown (at Madame Tussaud's)" was played on MTV, which was unusual for a Christian artist at the time. The video featured an appearance by actress Lisa Whelchel. The album also included "We Don't Need No Colour Code", which was critical of Bob Jones University and its anti-interracial dating policy, a policy that was not abandoned by the university until 2000. Another track on Meltdown, "Guilty By Association", one of the original demo songs, includes a jab with an impression in the middle eight at televangelist Jimmy Swaggart.

During a performance at 1984's Cornerstone Festival, Taylor fractured his ankle while jumping off the stage. He finished the summer's tour in an electric wheelchair.

Taylor followed that release with On the Fritz, produced by Foreigner's Ian McDonald. Keeping with Taylor tradition, Fritz took aim once again at religious leaders, such as Bill Gothard ("I Manipulate"), greedy TV evangelists ("You Don't Owe Me Nothing"), politicians using religion or avoiding questions of morality in order to get votes ("It's a Personal Thing"), and public schools teaching "values clarification" to children, asking them to determine who should be thrown overboard in an overcrowded lifeboat ("Lifeboat").

In 1985, Steve received his first Grammy nomination in the "Best Male Gospel Performance" category, while also being nominated for Dove Awards as "Gospel Artist of the Year" and for Meltdown as the "Best Contemporary Album of the Year". Taylor and "Some Band" performed at the Dove Awards ceremonies in Nashville in April of that year.

Taylor also recorded a duet with Sheila Walsh, "Not Gonna Fall Away", a tune written and recorded in 1981 by David Edwards. This was released as a 12" single titled Transatlantic Remixes. Taylor and Walsh embarked on the "Transatlantic Tour" which included dates in the United Kingdom and the United States. Taylor and Walsh also participated in the recording of "Do Something Now", a collaborative effort, similar to "We Are The World", to raise money for Compassion International's famine relief programs in Africa.

In between performing, recording and touring, Taylor met and married Debbie Butler of Irvine, California. They were married by Taylor's father at a private ceremony in Connecticut. Mrs. Taylor designed the album cover for a compilation on Sparrow, The Best We Could Find (Plus 3 That Never Escaped), as well as some of Taylor's more colorful stage costumes.

In 1987, Taylor once again lived up to his controversial reputation with a song called "I Blew Up The Clinic Real Good". The song criticizes anyone who claims to be a pro-life activist who would blow up abortion clinics or kill doctors. The point of the song was lost on many and resulted in Taylor's album, I Predict 1990, being pulled from the shelves at some Christian record stores. Taylor himself would occasionally call those stores to explain the song to them. With 1990, Taylor's targets included mainstream Universities ("Since I Gave Up Hope I Feel A Lot Better", featuring fiddle work from Papa John Creech of Jefferson Airplane and Hot Tuna). Other tracks included "Jim Morrison's Grave", which once again brought Taylor some MTV exposure, and the Flannery O'Connor inspired "Harder to Believe Than Not To". Some stores also pulled the album as they thought the cover looked like a Tarot Card. Taylor's tour for "I Predict" was his most ambitious to date, bringing him to Australia, Canada, England, Finland, Hong Kong, Japan, New Zealand, Norway, Scotland, Sweden and the Philippines.

1990s
Taylor then took a break from music, until 1990 when he returned as the lead singer of Chagall Guevara. Their first recording was "Tale o'the Twister," which appeared on the soundtrack to the 1990 film Pump Up the Volume. The band released their only album, the self titled Chagall Guevara, in 1991 on MCA records. A follow-up album was begun, but not finished before the band was released from its contract, following slow sales for their debut.

Taylor returned with another solo album, Squint, and a live CD, Liver, in the mid-1990s. Squint included the track "Smug", which mocks Rush Limbaugh and Barbra Streisand as iconic masters of smugness. The album also included the song "Cash Cow", which takes a jab at yet another televangelist, Robert Tilton.

A tribute to Taylor entitled I Predict A Clone was released in 1994 that featured performances by Sixpence None the Richer, Fleming and John, Starflyer 59 and others.

In the years following those releases, Taylor focused his efforts on running Squint Entertainment and producing projects for other artists, including Sixpence None the Richer's self titled 1997 release that featured the hit singles "Kiss Me" and a cover of The La's "There She Goes". He would be most noted for his work with Newsboys, co-producing five of the band's albums while making contributions to the band's songwriting. Squint Entertainment lost its financial backing in 2001 and Taylor was forced out of the company.

2000s
While still running Squint, Taylor had begun a film project called St. Gimp, co-written with Willi Williams. That film was abandoned in 2001 when Squint Entertainment lost its financial backing and Taylor was forced out of the company. Taylor co-wrote and directed the feature film The Second Chance starring Michael W. Smith, released February 17, 2006. He also appeared in the documentary film Why Should the Devil Have All the Good Music? (released on DVD in 2006), in interview segments and performing part of "We Don't Need No Colour Code". New music was scarce, but Taylor did contribute one song, "Shortstop", to Squint's 2000 compilation Roaring Lambs. He also recorded "Yo Ho Hero", a collaborative track for the 2008 VeggieTales movie The Pirates Who Don't Do Anything.

2010s
In 2010, Taylor began working on film adaptation of Donald Miller's book, Blue Like Jazz. Kickstarter donations helped finish the project, and the film was released theatrically on April 13, 2012, and on DVD/Blu-ray on August 7, 2012. June 2011 saw the release of "Closer " (featuring Steve Taylor and Some Other Band), a collaboration with Peter Furler on his first solo album, On Fire. The group consisted of Steve on vocals, Jimmy Abegg on guitar, John Mark Painter on bass, and Furler on drums. According to Furler, an entire album was recorded from these sessions, the material consisting of Taylor/Furler songs unused by the Newsboys. One track from the group, "A Life Preserved", was released August 7, 2012 on the Blue Like Jazz Motion Picture Soundtrack album and credited to Steve Taylor & The Perfect Foil. An "official remix" of "A Life Preserved" also surfaced at pastemagazine.com, and Taylor returned to the stage for Creation 2013 festival. A 2013 Kickstarter drive funded the band in studio and on the road.

A February 2014 Kickstarter update revealed previously completed studio work to be an album by tour co-headliner Peter Furler Band (released March 2014), with the four members of the Perfect Foil as producers. Soon after, Steve Taylor & The Perfect Foil announced via Kickstarter that their own new album Goliath was completed August 23, 2014. This marked Taylor's first studio album in twenty years. Only a Ride", the debut single from the album, was released via streaming and mp3 download on September 16, 2014, only to Kickstarter campaign supporters. The music video for "Only a Ride" featured scenes from the film trailer for Stunt Rock, a 1980 film by director Brian Trenchard-Smith. Music videos for "Standing in Line" and the title track to Goliath followed. The album, distributed independently, through Taylor's own Splint Entertainment, was released on November 18, 2014. Plans for extensive touring were announced.

In June of 2015, Taylor and the Perfect Foil entered Electrical Audio in Chicago with Daniel Smith of Danielson and engineer Steve Albini. In December of 2015, Taylor announced (via Kickstarter) that the resulting EP, Wow to the Deadness, will be released in January 2016, under the name Steve Taylor & The Danielson Foil.

As of October 31, 2020, Steve Taylor is the Director of the School of Theatre and Cinematic Arts and Assistant Professor of Film & Creative Media at Lipscomb University in Nashville, TN. He and his Chagall Guevara bandmates have just completed a successful Kickstarter campaign with new music being released in the fall of 2020. 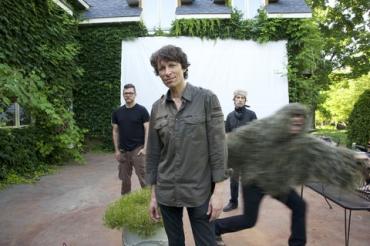 Nashville, Tenn.  – Acclaimed filmmaker, writer, producer and recording artist Steve Taylor, director of the Blue Like Jazz movie, is taking a sabbatical from filmmaking to release his first studio record in 20 years with his new band, Steve Taylor & The Perfect Foil. 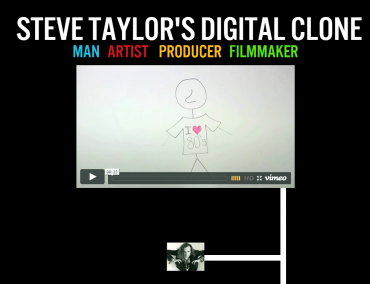