David Luther Cleveland is listed in the credits for the following albums: 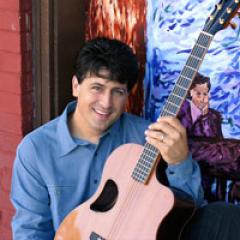 Dave Cleveland has established himself as one of the Nashville's premier guitarists, having recorded and toured with a "Who's Who" of top artists. He has played every style of guitar music from bluegrass to rock, but is best known for his acoustic style on the McPherson guitar, mandolin, dobro, banjo, and 12-string guitar.

Dave's career has mainly focused on Christian and Worship music. He has been the band director for Twila Paris, played live with Michael W. Smith, Amy Grant, the Katinas, and David Baroni, and has hundreds of recording credits over the past 20 years with top artists like Steven Curtis Chapman, Point of Grace, 4 Him, Crystal Lewis, Michael O'Brien, Cindy Morgan, Anointed, Russ Taff, Steve Green, Wes King and Out Of The Grey, and many more. He has been part of major soundtracks for the films "The Apostle" and "Hannah Montana 2: Meet Miley Cyrus," and also such acclaimed projects as Steven Curtis Chapman's Grammy award winning "The Live Adventure," Avalon's music special for the PAX network, "Live At Woodlands" featuring Crystal Lewis, and even "The White House Salutes Gospel Music" event. Dave has also composed numerous themes which have aired on networks including A&E, HDTV, and WGN.

As a songwriter, Dave has contributed songs to albums by Clay Crosse and McPherson 1, and also to the children's release "Butterfly Kisses and Bedtime Prayers." He has two instrumental album releases of his own to his credit," Beautiful Dream" and the 2007 Gospel Music Association Dove Award Nominee for Instrumental Album of the Year, "Guitars in Worship."