Jerry Chamberlain is listed in the credits for the following albums: 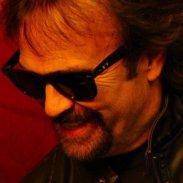 Jerry Chamberlain has been a member of:

In late 1974, Chamberlain was asked to join Jubal's Last Band, a band that consisted of Terry Scott Taylor, Steve Baxter and bassist Kenny Paxton. Marty Dieckmeyer was soon brought in as a replacement for the departing Paxton. Sometime in the middle of 1975, Jubal's Last Band or Jubal (as a shortened form of the name was briefly used) auditioned for Maranatha! Music and Calvary Chapel (without Baxter, who couldn't get off work) in hopes of signing a recording and performance contract. At a Maranatha Music meeting, another band led by Darrell Mansfield, was also using the name, Jubal. The two bands decided to change their names to avoid confusion. Mansfield renamed his band Gentle Faith, and Jubal's Last Band/Jubal became Daniel Amos.

Daniel Amos succeeded in landing a recording and performance contract, and quickly recorded their first song for the label, Taylor's "Ain't Gonna Fight It" for the Maranatha 5 compilation. A full album, produced by Al Perkins, followed. Chamberlain quickly became an important part in the sound of D.A. In the band's early days of country/rock, Chamberlain would often launch into a rock and roll guitar solo inappropriately in the middle of "Happily Married Man." In the later years, his guitar playing drove songs like "Endless Summer" and "I Love You #19."

Chamberlain was married to singer/songwriter/guitarist/bassist Sharon McCall from 1980 to 2005. The couple had a band together in the mid-1980s called Boy-O-Boy, shopping demos and playing clubs of L.A.

In 2001, Chamberlain and McCall recorded a song ("Message From The Country") with pop rocker Doug Powell (Swag), drumlord Ken Coomer (Wilco, Uncle Tupelo, Swag) and session ace Jonathan Yudkin (The Chain Smoking Altar Boys) for the Jeff Lynne tribute Lynne Me Your Ears (2002) under the moniker, The Balls of France.

The years 2004–2005 saw Chamberlain and McCall join forces with friends to form an all-British Invasion outfit called The Pickled Beats. The band continues, with slight lineup changes, to play the occasional live performance.

In 2006, Chamberlain once again joined forces with Terry Taylor by lending a hand on the Lost Dogs album The Lost Cabin and the Mystery Trees. Chamberlain also returned to his Swirling Eddies pseudonym "Spot," for the 2007 release The midget, the speck and the molecule.

After meeting and doing gigs together over 30 years ago in California, Chamberlain and veteran folk-pop-rock singer-songwriter/record producer/musician/vocalist Pam Mark Hall joined forces as the duo, Pamelita and Parker, in the Fall of 2008.