Tony Morra is listed in the credits for the following albums: 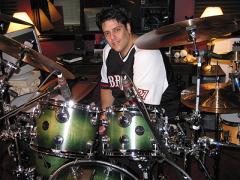 Tony Morra has been a member of:

Tony currently lives in beautiful Franklin, Tennessee, a suburb 15 minutes south of one of the most storied cities for recording music in the Modern Era! Now how is it that this Italian New York City native made his way down to Music City USA you may ask? Well, the story is one of the hard work, faith, determination and some might say… destiny!

Tony’s career may have begun before he even was born! You see Tony’s families were all musicians. His great grandfather, Joseph Morra, was the “Town” musician back in Panni, Italy. Now the Morra family back then in Italy was not the typical model of the families of today where you have 2.5 kids, a house and a dog. You see there were 14 in the Morra brood, 13 brothers and one sister! All the siblings played an instrument, and Tony’s grandfather, Faustino, was the drummer of the mighty musical family. Faust and the rest of the family made their way to the States back in the early 1900′s. They arrived in the country to perform operas from overseas. Tony recalls his grandfather telling of how they toured the States back in the day. He would call off each state with his poor worn fingers and beautiful Italian accent!

The music gene was passed to each son and daughter of that generation of Morras! Tony’s dad, Joe, kept the family tradition going and gravitated to the drums! Born in 1929, Tony’s dad grew up in an era where Jazz and Big Band Swing was King. Having grown up in this atmosphere, you can say Tony was saturated with music from the earliest of ages. Music of all kinds! The house was blaring with either Benny Goodman, Miles Davis, Bach, Mozart, and of course, The Beatles and the popular music of the day. No genre was discouraged!

Story has it that although the Morra family passed on the musical genetics, it was Tony’s Mom who launched his drumming career. You see, back then the fmaily laundry room was in the basement. Now along with the laundry room was a finished basement with a mint 1938 Slingerland Radio King Drum set! Not too shabby. So when “Mommy” was doing the laundry, she would encourage the 2-year-old “Anthony” to play Daddy’s drums. This way she would know where he was at all times.

Mom would put on her records and “Anthony” would have at it! It wa about a year later that Mommy could tell that the banging was starting to make sense. At that point, there was no turning back. Where other children at the time were playing with GI Joes and Tonka trucks, Tony much preferred to stand behind the drums and play music by The Beatles, Frankie Valli and the Four Seasons (standard issue if you were Italian and lived in NY), and one of Tony’s all time favorites, Tom Jones!!!

As the years went on Tony “grew” into the drum set! The natural ability was there but needed to be cultivated. Tony’s grandfather would tap out rhythms and write them out. Tony’s dad would sit with him and guide him through the rudiments of drumming.

Tony’s musical education came from many sources and LP’s. At the age of 9 he was already out gigging with dad. There were times when contractors would call and book dad and ask if “Little Anthony” could come and “sit in” as a little showpiece. He recalls 2 songs he played all the time, “Watermelon Man” and “Sonny”. He would even get a solo! WOW!

As Tony matured as a person and a musician, he studied with independent drum instructors Joe Cusatis and Hank Jaramillo. He also studied at the Brooklyn Conservatory of Music and a short stint at Queens College’s Aaron Copeland School of Music. Tony will tell you that a formal education in music is something all musicians need to opursue. BUT the real education is out there! Playing music, experiencing it first hand outside the classroom.

Tony started to land gigs with up-and-coming artists in NYC. He performed at New York City’s most storied venues, CBGBs, The Bitter End, The China Club, The Kat Club and so many more that have since come and gone. Performing and “hanging out” at these clubs forged relationships with many other great NYC musicians, which led to more serious artist gigs and recording dates.

Tony is not to let the technology of the day creep by him. In the new era of drum machines, many “hemmed and hawed” at the new technology. Not Tony, he saw this as an opportunity to break into even more markets. He invested in an Emulator SP-12 sampling drum machine and was soon one of NYC’s top call “Drum Programmers”!

Because of his extensive knowledge with the “new electronic era,” Tony started to get offers to tour with some top R & B artists. The marriage of live drums and electronics was one of Tony’s specialties and was utilized by pop singing trio “Sweet Sensation”. Sweet Sensation had 5 Top Ten hits during Tony’s tenure with them including the Number 1 hit “If Wishes Came True”. This led to work with 90′s R&B vocalist Stevie B. “Sweet” was opening for Stevie, and when that tour was over, Stevie approached Tony and asked if he would move to LA and join his band. Nothing like moving to a new place with a gig, so Tony loaded up the truck and moved west!

Stevie B had huge success with a track called “The Postman Song” (Because I Love You). The track went straight to Number 1 and stayed on the charts for almost a year!

Tony shared the stage with the likes of Michael Bolton, MC Hammer, Wilson Phillips, C & C Music Factory, New Kids On The Block, Amy Grant, and many of the pop acts of the time. It was a fast and furious time. In between the hectic touring, Stevie would take time to track his new record. This would lead to Tony having the opportunity to work with legendary songwriter Diane Warren. Having spent time with Diane in the studio and socially, Tony remarks on how and what goes into creating a hit song. “It’s more than just playing drums. It’s knowing the lyrics, the mood of the song, what the artist is wanting to say and supporting that to the point of being out of the way!”

After Tony’s time in LA, he returned back to his home in NY. This incredible journey home led him to the next phase of his life, marriage! On returning home, Tony was re-acquainted with his grammar school sweetheart! Tony & Laurie were engaged to be married 5 months after this reunion! At This point in Tony’s life, his faith in the Lord was deepening.

Life had slowed down a bit, and after all those years of traveling at light speed, he was taking time to focus on the spiritual side of his life. Tony’s wife had been attending a prayer group back in their hometown in Queens. It was an amazing retreat from the “life on the road,” a great time to reflect and really find out who he was and to refocus. Little did Tony and Laurie know that this would bring them to a new place. Literally! That new place for them was Nashville, Tennessee.

The prayer group’s “sound man” was road/business manager Stephen Connolly. Stephen was currently working with long-time friend and artist Kathy Troccoli (Everything Changes ’93). Kathy was looking for a drummer for her current touring schedule. Tony had been playing with the Worship team and Stephen asked if he would be available to cover a gig for “KTs” current drummer. Tony agreed, but little did he know he would be playing a “Live Television” broadcast going out to 75 nations around the world. Oh yeah, by the way, there’s one rehearsal! WHAT!

Kathy was playing a concert for those who volunteered to help the City of Baltimore, MD welcome Pope John Paul II for the mass he would be saying at Camden Yard. Okay, playing drums, artist with top 3 hit song in the country, Major League Stadium, TV Broadcast (always makes Mom happy), amazing band and THE POPE! Pretty much covers it!

This was the beginning of an incredible friendship with Kathy. Soon after, Tony became KT’s Music Director! Through the years Tony had been to Nashville with KT. Kathy was having great success in the secular pop market, but her career had long been flourishing in the Christian Contemporary Market. Annually she would attend the Gospel Music Association convention in Nashville where she would perform. Tony performed with KT several times and started to get offers for work in Music City. After a lot of prayer and consideration, Tony and Laurie loaded up the truck and this time, headed south. And the rest, as they say, is history!

Tony has gone on to play with and Music Direct for many of the top acts in the Christian Contemporary Market: Avalon, Point of Grace, Nicole Nordeman, Crystal Lewis, and Twila Paris to name a few. These associations have brought Tony in contact with many fo the top musicians in Nashville, many of whom are top call studio players. As it is in the business, one things leads to the other, as do the recommendations. Tony has joined the elite group of Nashville recording musicians who have the distinct honor of recording for many artists, established and new up and comers!

Tony currently keeps quite busy tracking drums for all kinds of projects, Country, Rock, Pop, Christian Contemporary and Jazz. He has most recently been featured on Discrete Drums’ “Heavy Mental” Sample Library, worked with Grammy-Nominated producer Matt Bronleewee on Rebecca St. James’ most recent single “Alive,” and perhaps one of the most favorite projects, “Songs From The Neighborhood,” a tribute to Mr. Rogers. He had the honor of working with artist such as Amy Grant, John Pizzarelli, Crystal Gayle, Bobby Caldwell (What You Won’t Do For Love), Roberta Flack and Vocal Legend B.J. Thomas! His work takes him to some of the finest recording studios Nashville has to offer! Chances are, though you’ll catch him as his exclusive drum tracking room “The Downtown Batterie.” The “Batterie” has received acclaim from around the world! Mix Magazine used Tony”s room as the “Template” for the personal drum tracking room (Mix Mag Jan ’05). Tony’s drum tracks are currently being played on radio stations and televisions across the country. Most recent tracks will appear on Regis and Kelly and numerous TV commercials.

Lets not forget to mention that Tony is an accomplished producer himself! His latest work with former Avalon vocalist Cherie Adams, “The Sweet Life,” is climbing the charts. “Water,” the first single from “The Sweet Life” went Number 1 in radio markets across the Midwest!

Tony is a busy working musician, but never too busy to talk to you on the phone or via email. As a matter of fact, he’ll talk your ear off if you let him. as his friends will tell you, Tony is never at a loss for words. Great stories from the road, sessions and some great stories about growing up in NYC with all those musical Morras!

Always the consummate professional, Tony gets inside the music and breathes new life into any track he’s given to work on! The sounds and performances from Tony’s Downtown Batterie can stand up to drum tracks recorded anywhere across the globe.

Websites:
Website: DowntownBatterie.com
External links are provided for reference purposes. Christian Music Archive is not responsible for the content of external internet sites.
Created by: siremidor on 26-July-2010 - Last Edited by admin on 07-January-2016