Bryan Lenox is listed in the credits for the following albums: 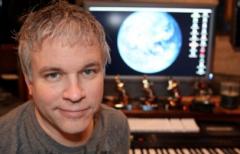 When speaking of producers, there are few that are more accomplished, or highly spoken of than Bryan Lenox. Since beginning his career in 1988, he has had a major hand in several hundred projects, over 50 #1 hits, and all with the who’s who in Christian and mainstream music. His first major production job (yes, I said FIRST) was Michael W Smith’s Go West, Young Man album, which won the American Music Award for Best New Artist, had a Grammy nomination, and sat at #6 on Billboard’s Hot 100 for several weeks with Place in This World which Bryan produced, played, engineered, and programmed.

Aside from Bryan’s work with these artists, he also spends significant time working with new and independent artists who are looking to grow and learn on their creative journey. His involvement with Secret Anthem, an online song review and counseling service, is evidence of his commitment to this passion.

Websites:
Website: BryanLenox.com
External links are provided for reference purposes. Christian Music Archive is not responsible for the content of external internet sites.
Created by: admin on 26-July-2010 - Last Edited by admin on 07-January-2016