Sonny Garrish is listed in the credits for the following albums: 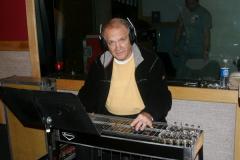 Growing up in a musical family, steel guitarist Sonny Garrish was surrounded by musical ambition at an early age. His father, who wanted to be a professional musician, began using Sonny in his various bands when he was as young as seven. By 15, Sonny was no longer singing with his father, but backing him on steel guitar. And, while still a senior in high school, Sonny started playing with a group of musicians from nearby Washington, D.C. A standing gig in Fairfax, Virginia at Hunter's Lodge, which often hired Nashville talent such as Johnny Paycheck for weekend gigs, led Garrish to his first job in Nashville. After giving his number to members of Bill Anderson's band, the bandleader called Garrish and offered him a job. That opportunity led to session work and, for the next several years, Garrish slowly built a name for himself around Nashville.

Not an overnight success by any stretch of the imagination, Garrish often put his name on substitute lists, filling in for the first-choice musicians who were sick, or playing on writer's demos in hopes that his playing might stand out and catch the attention of a producer. Slowly he began getting breaks such as the 1976 Eddie Rabbitt session he played on that subsequently became a hit. And, by the '80s, Garrish had become a top-notch steel guitarist playing on records by Glen Campbell, Billy Ray Cyrus, and B.B. King, among others.