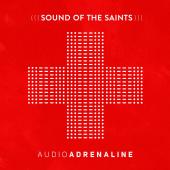 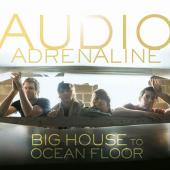 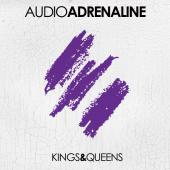 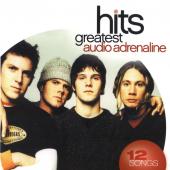 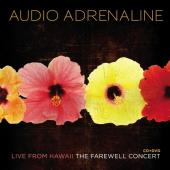 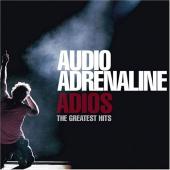 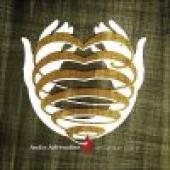 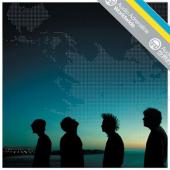 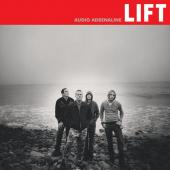 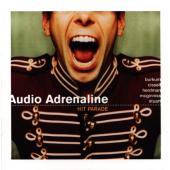 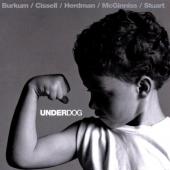 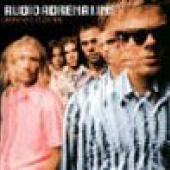 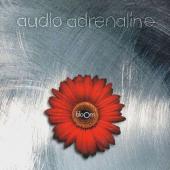 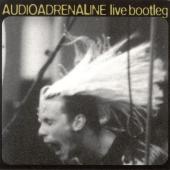 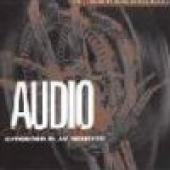 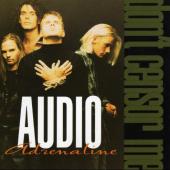 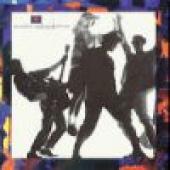 Audio Adrenaline is listed in the credits for the following albums: 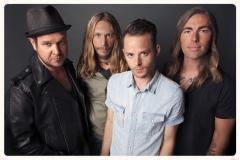 Audio Adrenaline is a Grammy Award-winning Christian rock band that formed in the late 1980s at Kentucky Christian University in Grayson, Kentucky. During the band's 17-year existence, they were awarded two Grammy awards, multiple Dove Awards and they released 17 number one singles. They were regular performers at the annual Creation Festival, Spirit West Coast festival and Agape Music Festival. Audio Adrenaline also performed at the Alive Festival every year up to their last performance in June 2006.

Audio Adrenaline, along with other Christian music acts like dc Talk and Newsboys, helped fuel a revolution in the "alternative" Christian music genre. This was started by bands like Under Midnight, Mortal, Circle of Dust and the indie labels Blonde Vinyl, Frontline/Myx, Tooth & Nail, and 5 Minute Walk.

The band was formed in 1986 under the name of A-180 by Mark Stuart, Barry Blair, Will McGinniss, David Stuart, and Phil Vaughan, who all attended Kentucky Christian University. The next year, the band temporarily disbanded when Mark went to Haiti for a semester. Upon Mark's return to Kentucky, the band reformed with Ron Gibson on drums. They became a popular local band, booked by the school nearly every weekend; traveling as far west as Texas, north to Chicago, south to Florida. The band did over 100 shows during this time and recorded two independent releases under the name A-180. The first was You Turn in 1989 and Reaper's Train in 1990. Reaper's Train featured the original version of the song "DC-10", also found on the first Audio Adrenaline release.

The band's big break would come in the form of Bob Herdman. Herdman approached A-180 with two songs he had written, one of them called "My God", and asked A-180 to record it. After "My God" was recorded at Landmark Recording Studio, Ohio, A-180 asked Herdman to join them as their songwriter. The demo tape was sent to radio stations and scaled the charts quickly. The song caught the attention of Toby McKeehan (from dc Talk), who brought it to the executives at ForeFront Records. The label decided to offer a record deal to A-180 but had them change their name to "Audio Adrenaline". The name Audio Adrenaline comes from an incident in which Bob Herdman had been listening to some loud and fast secular music; he was so enthralled by it that he apparently exclaimed "This is like... audio adrenaline!" while jumping wildly.

1990s
After signing their deal with Forefront, the band started writing and recording demo songs with some similar to "My God" for the first album. Meanwhile, David Stuart left the band to focus more on his family and Gibson left at about the same time. However, the edgy demo songs were not what Forefront was looking for. What resulted was a debut album of drum machine driven hip-hop. Their first album under Forefront, the self-titled Audio Adrenaline, was released in 1992. It included "DC-10", the only track from the original A-180 recordings and was well received selling 75,000 copies. The follow-up album, Don't Censor Me, came the next year and featured what is considered the biggest hit of the band, "Big House". The album sold 250,000 copies and launched the band into stardom. The album also includes the song "We're a Band", which remained one of their live staples. Next the band released a live album titled Live Bootleg.

In 1996, their third studio album, Bloom, was released. The album featured the band returning to their original rock roots, as opposed to their experiments with rap music. The album was a huge hit becoming (in 1999) the only album of the band to be certified gold by RIAA. It also marked guitarist Blair's final album, who decided to become a music producer. Blair contributed to a song from their next album.

With Blair gone, Audio Adrenaline needed a new guitarist. They found a temporary fill-in with Brian McSweeney (from Seven Day Jesus), but he decided to stay with his fulltime act. They then turned the guitars over to Tyler Burkum, who joined the band at only 17 years of age, just in time to record some guitars on the band's next album, Some Kind of Zombie. The album, released in 1997, included a song from Barry Blair and was the first to feature Ben Cissell as the band's full-time drummer, though Cissell had played percussion on their previous album. In 1999, the band released Underdog, its fifth studio album, and opened for dc Talk on the Jesus Freak World Tour.

2000s
After a short break, Audio Adrenaline released their first greatest hits compilation, Hit Parade, in March 2001. Included in the album are three of their most popular songs, "Big House", "Hands and Feet", and the live staple "We're A Band", as well as a song with The O.C. Supertones, "Blitz", from the album Some Kind of Zombie. It was at this time that Herdman left the band to become president of a new record label, Flicker Records, which he co-founded along with Stuart and McGinniss.

In November 2001, the band released a new studio album, Lift which several critics have classified as the band's best. Lift also marked the first time that guitarist Burkum shared lead vocals with Stuart. The band then followed with their ninth album, Worldwide, released in 2003. Worldwide went on to win a Grammy Award for Best Rock Gospel Album in 2004, the first of two Grammys for the band. In 2004, the band, along with Herdman, founded a project in Haiti called the Hands and Feet Project, in which the band built an orphanage for children. The band's tenth studio album, Until My Heart Caves In, was released on August 30, 2005. The album featured most of the lead vocals by Burkum, with only a few sung by Stuart. Until My Heart Caves In received another Grammy Award for Best Rock Gospel Album in 2006. "Clap Your Hands" was also played on ESPN with football game highlights.

On January 18, 2006, Audio Adrenaline announced that they were retiring from active music ministry and cited Stuart's "ongoing vocal challenges" stemming from vocal cord damage as the primary factor. On July 27, 2006, the band played at the popular Christian music Creation Festival, where they had performed every year since the group formed, for the last time with their original lineup. On August 1, 2006, they released their final compilation album, Adios: The Greatest Hits, a farewell album containing two new tracks as well as a selection of the band's greatest hits to date.

For their final national tour in Spring 2007, Audio Adrenaline opened for MercyMe on their "Coming Up To Breathe Tour". The band performed their last live concert on April 28, 2007, at the Waikiki Shell in Honolulu, Hawaii. Their final project, which was released on August 28, 2007, is a live CD–DVD combo entitled Live From Hawaii: The Farewell Concert. The album earned two nominations at the 39th GMA Dove Awards, winning Long Form Music Video of the Year. The group's final performance was at Easterfest '09 in Queens Park, Toowoomba, Australia.

Return with new lineup
In 2012, the band reformed with an altered lineup, featuring Kevin Max, formerly of DC Talk, as the new lead vocalist. On March 3, 2013, Audio Adrenaline released Kings and Queens. The album peaked at No. 70 on the Billboard 200 chart, and No. 4 on the Christian Albums chart.

The faces may look a little different, but the heart and passion of this GRAMMY-winning band remains unchanged. Yes, that’s Kevin Max of dcTalk and solo fame at the mic and founding member Will McGinniss on bass. The new lineup is rounded out by CCM vets Dave Ghazarian (Superchick), Jared Byers (Bleach), and singer-songwriter Jason Walker. Former front man and co-founder Mark Stuart remains very involved and contributed to many of the songs for the new album.

This talented group of like-minded musicians shares a common goal: to be the voice for orphans in Haiti and around the world. Lead single, “Kings & Queens,” is an orphan anthem that celebrates the transformation God can bring about. The album’s remaining fresh rock tracks are just as powerful. The new Audio Adrenaline is creating music that will move you while making the world a better place for children in need. Thanks to the band, Know Hope and AA’s label, Fair Trade Services, a portion of proceeds will directly benefit the work of Hands & Feet Project. For more information, please visit AudioA.com and handsandfeetproject.org.

Audio Adrenaline 3.0
In February 2015, another massive shakeup took place as founding member of the band Will McGinniss--as well as his supporting cast of Jarod Byers, Dwayne Larring and former Abandon lead singer Josh Engler--all left the band, reflecting the first time Audio Adrenaline has existed without an original member.

Audio Adrenaline 3.0, as it's sure to be called, is now fronted by lead vocalist Adam Agee, who was referred in the band's official press release as the "former Stellar Kart frontman"--reflecting a shake-up in that band as well. In a tweet to a fan today Agee said, "We're going to hit pause on SK for a while."

As for McGinniss, his transition out of the band he started in the early 1990s comes with an increased role in the organization that inspired the band's 2012 comeback. He currently serves as Board President of the band-founded nonprofit orphan care organizationHands and Feet Project.

"The last several years have been an incredible blast and honor," said McGinniss. "To get to bring back Audio A, for one sole purpose--to champion the cause of the orphan and abandoned children through our work at the Hands & Feet Project in Haiti--was incredible. But now God is calling me to a new season in Him off the road. I have every confidence that with this new group of guys and an incredible bunch of new songs, Audio A will be all about that same goal. I pray God's heart and blessing over them."

"Love Was Stronger," the highly-anticipated new single from two-time GRAMMY® Award-winning recording artist and one of Christian music's most popular bands, Audio Adrenaline, drops today, in advance of the May 5 release of the group's Fair Trade Services sophomore album, Sound of the Saints. 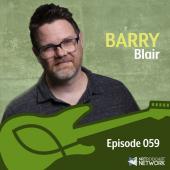 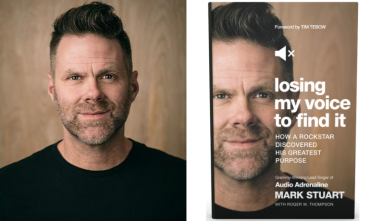 How A Christian Rockstar Had To Lose His Voice to Find It
November 05, 2019 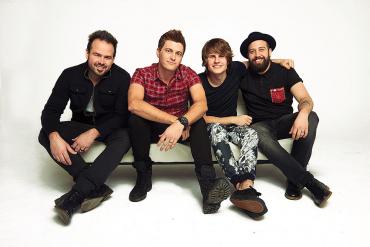 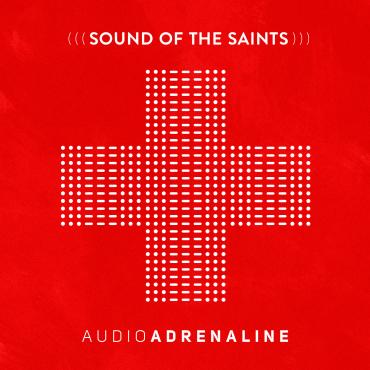 Nashville, Tenn.—Sound of the Saints, the critically-acclaimed May 4 FairTrade Services release from two-time Grammy® Award winners Audio Adrenaline, debuts this week at #1 on Billboard’s Top Christian Albums chart. The project also enters the Billboard 200 at #69, for the week of May 23. 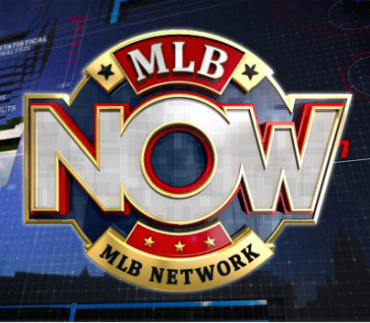 NASHVILLE, Tenn.—“Move,” the high-energy album-opener from GRAMMY® Award-winning Audio Adrenaline’s May 4 FairTrade Services release, Sound of the Saints, has been selected as the opening theme for “MLB Now,” which airs daily on the MLB Network.