Stephen Marcussen is listed in the credits for the following albums: 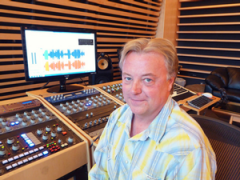 Stephen Marcussen is the founder and chief mastering engineer at Marcussen Mastering in Hollywood, California. Stephen has been mastering music for over thirty-five years (1979–present).

Marcussen's introduction to music recording happened in 1976 when, at the age of nineteen, he was offered a janitor position at Studio 55, record producer Richard Perry's Los Angeles recording studio. At Studio 55, Marcussen received an education in all facets of music recording and sound production. By the end of his Studio 55 tenure, Marcussen had earned his first album credits as an assistant engineer, working on The Manhattan Transfer's Pastiche, Boz Scaggs's Middle Man, and The Pointer Sisters's Special Things.