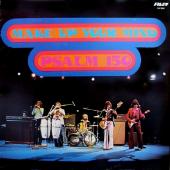 Psalm 150 was a seven-piece Jesus music band notable for its horn section, rhythmic style and soulful sound at a time when Christian contemporary music was generally performed with acoustic or soft electric folk/pop songs.

The group’s name came from the 150th Psalm in the bible which speaks of praising God in all places with various instruments. they recorded two albums in 1974; Make Up Your Mind, for Manna Records and the unreleased Chasin’ the Wind produced by Andraé Crouch.

Websites:
http://www.psalm150fellowship.org/Psalm_150_Band.php
External links are provided for reference purposes. Christian Music Archive is not responsible for the content of external internet sites.
Created by: siremidor on 19-June-2011 - Last Edited by siremidor on 13-August-2016