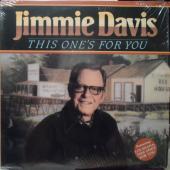 Jimmie Davis is listed in the credits for the following albums:

Jimmie Davis, who was born James Houston Davis on September 11, 1899 in Beech Springs, Louisiana, had successful careers in politics, country music, and Southern Gospel music. He served two terms as Governor of Louisiana, and was inducted into the Country Music Hall Of Fame, Nashville Songwriters Hall Of Fame, and Southern Gospel Music Association Hall Of Fame. He also served as President of the Gospel Music Association in 1967.

Davis started out as a country music singer in the 1930s, entered politics and was elected Governor for the first time in 1940. After his term as Governor, he returned to his Southern Gospel roots, recording many Southern Gospel albums over the next several decades. During the 1950s, he toured with the Plainsmen Quartet?.

Davis was elected to his second term as Governor in 1960. His First wife, Alverna, passed away in 1967. In 1969 he married Anna Carter Gordon, an original member of the Chuck Wagon Gang. He stayed involved in Southern Gospel music until the 1980s.

He was a prolific songwriter and owned his own publishing company, Jimmie Davis Music.