Barry Blaze is listed in the credits for the following albums: 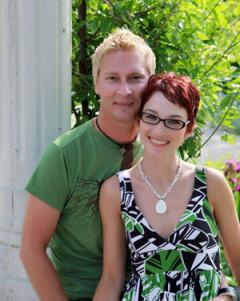 Barry Blaze has been a member of:

Barry Blaze is best known for being the creator, driving force, and voice of the 90's band Code of Ethics. In 2000 he put out his last CD Blaze on Word Records. After 11 years on the road and at the end of the "Blaze" tour he asked a soul searching question, "O.K. God, what next?"

Soon after, a phone call from a pastor in Jacksonville, Florida led Barry and his wife Cynthia back to his home town and to a position on a church staff as Worship Leader. This was an awesome opportunity to use the leadership skills God had equipped him with, and see ministry and life change on a weekly basis. Worship became, and is still Barry's passion.

On May 1st, 2004, while enjoying his favorite pastime of motorcycling, Barry had a near-fatal accident caused by an unanticipated thunderstorm. Severe head trauma caused significant and permanent hearing and eyesight loss.

The title track to Barry's new CD Patiently Waiting was penned in the middle of one night while Barry couldn't sleep. He was contemplating again "O.K. God, what next?" He wondered why the God that loved him so much, the One who placed this passion of worship in his heart, would allow the possibility of never hearing the beauty of music again. It was during the 3 years of ongoing surgeries and recovery that the songs on this CD were inspired, written and recorded.

There are songs of waiting for God's voice and reassurance. There are also songs of love, praise and thanks to the Creator who knows all things and works them together for His good.

Through God's power alone, Barry continues to lead worship each week, record music as an artist, and serve the Great Comforter who is worthy of all our praise.

Barry Blaze has been leading worship in Jacksonville Florida since 2001. After a near fatal motorcycle accident in 2004 and a lengthy recovery period to restore partial hearing and vision, he recorded "Lost In Egypt" that was released Feb 2009. While still leading worship he has taken time to tour with his wife Cynthia (DJ. Chi) with a revolving cast that included former Code of Ethics drummer Rick Brainer as well as Dave Ott, Matt Borelli, Ben Roth (forthewhile, comewind), and Julie Rodenhizer.

Websites:
MySpace: BarryBlaze
External links are provided for reference purposes. Christian Music Archive is not responsible for the content of external internet sites.
Created by: admin on 26-July-2010 - Last Edited by admin on 07-January-2016