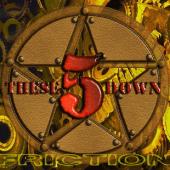 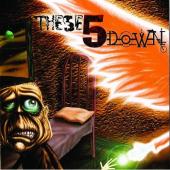 These 5 Down is listed in the credits for the following albums: 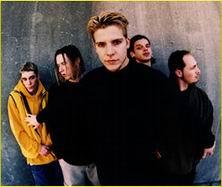 These Five Down is a Christian metal band from Michigan made up of five Christians who turned (or returned) to their faith for salvation from previous awesome lifestyles and aim to preach faith through hardcore music. They were signed to Absolute Records and have released two albums which have spawned four top 10 Christian Metal radio hits, including three #1's. Progressive Airplay Journal hailed the band as "Breakout Artist of 2000".

For These 5 Down, hardcore truths have always been a fact of life. Drugs, sex, alcohol and lifestyles of experimentation and excess drove each of these prodigals to the hardcore truth they now embrace...the radical saving grace of God.

Andy Hittle, Brandon Whitlock, Nathan Bauman, Justin Pletscher and Rob Brunell now make it their mission to reach out to both believers and nonbelievers through industrial-strength Christian rock.

Hittle, 20, a drummer since the age of 12, grew up in church, but struggled during his teen years with rejection and rebellion, finally turning to drugs and alcohol to ease the alienation. After several months, though, he discovered that his love for hardcore rock could be a powerful tool in the hands of God and he now encourages Christians with his music and testimony.

Whitlock, 17, came from a broken home, but attended church since childhood. He began playing guitar at 14, and was soon swept up in the party life by peer pressure. He dropped out of school, was kicked out of his house and unable to find work. He realized that his life wasn't worth much without God and now urges young people in similar circumstances to trust the Lord for direction and purpose.

Brandon, 23, was convicted of a felony by the age of 17 and spent his 18th, 19th and 20th birthdays in jail for different crimes. He was playing guitar in a secular band when God began to deal with him about his music choices. He signed on as lead singer with a Christian punk group and his decision to dedicate his talent to the Lord eventually led him to These 5 Down.

Pletscher, 17, was an unchurched boy of 10 when his parents divorced. With no spiritual foundation or direction, his life was dominated by a fascination with Marilyn Manson and marijuana. In 7th grade, he was introduced to the guitar, and a Christian friend who eventually inspired him to seek the Lord. Justin believes that God had called him into the music ministry with These 5 Down.

Brunell, 20, was raised by his evangelist father, and attended church and Christian school most of his life. At age 17, his raw talent earned him a scholarship to a Christian college. But a year of partying led to experimentation with drugs. God's hand directed him back to his primary focus, and now Rob is one of the leaders in his home church. His passion is to reach the lost with hardcore rock and preach the Gospel.

These 5 Down may have been down once. But never out.

Websites:
http://www.absoluterecords.com/
External links are provided for reference purposes. Christian Music Archive is not responsible for the content of external internet sites.
Created by: admin on 26-July-2010 - Last Edited by admin on 07-January-2016