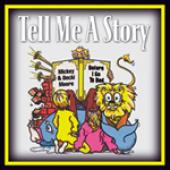 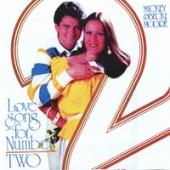 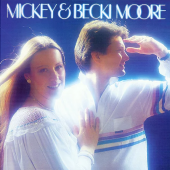 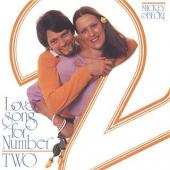 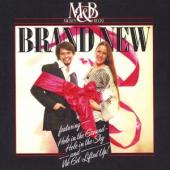 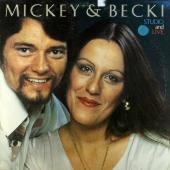 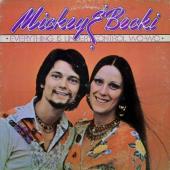 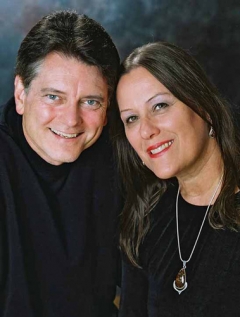 Mickey and Becki Moore met by sharing a hymn book at a college Christian retreat, and music would thereafter be a major part of their lives. On a whim, the two art students from Virginia entered that evening’s talent program which led to singing invitations throughout the state. They married in 1970 and moved to Chicago immediately after graduation. Mickey accepted the position of art editor for InterVarsity’s “HIS Magazine” and Becki entered the fashion design field. Later she became the manager of a large fabric store, but her managerial position was unfairly and abruptly taken away by a new supervisor. While seeking answers through prayer and Bible study after this loss, the Lord gave Becki the gift to write her own music, something she had never done before.

In 1974 the couple moved to New York City to pursue music as a career. After two years of singing in clubs and on the streets of Greenwich Village, their agent sent them to Nashville with contacts for getting a recording contract. After rejections by both secular and gospel labels, Mickey and Becki laid down their plans for a music career and sought the Lord for new direction. The very next morning the Lord woke Mickey with the clear message saying, “No. It’s not over yet. You belong in gospel music. Don’t worry about the record companies. Start your own.” They set their entire savings of $5000 as the budget for their first album, Everything Is Under Control Wo-Wo. With all 1000 albums packed in their Vega station wagon, they embarked on a cross-country tour. Seven weeks later they returned with exciting stories of God’s anointing, provision and direction, and they were sold out of all their albums.

Maiden Music recordings
God continued working miracles to provide for Mickey and Becki, and once again they emptied their bank account to produce their second album, Studio & Live. Noel Paul Stookey, of Peter, Paul & Mary fame, had become a personal friend and agreed to produce this album. One side of this record was recorded in a live concert at The Lamb’s Club in New York City and the other side was recorded at Noel Stookey’s Hen House Studio in Maine. Mickey and Becki saw God change people’s lives as they continued to tour and minister across the country. Radio stations started giving them more airplay, invitations to sing at the large festivals came in, and the media began to give them more recognition. Their refreshing concert antics and banter caused some to refer to their music as “off the wall gospel.”

The Lord once again provided the finances for their third album, Brand New. As they surrounded this project with prayer, Mickey and Becki felt led to ask their friend, Joyce Suggs, to share her testimony during the song “Miracles.” Becki had written this song as a surprise for the dedication of Joyce’s baby, Molly Marie. This song, with the testimony of Joyce and her husband’s victory over drugs, alcohol, prostitution and homosexuality, brought hope and healing to thousands while bringing these issues out into the open for ministry in the church. Mickey and Becki feared this song would never get airplay because of its content and extended length. These fears were abated when it became the first radio cut Mickey and Becki heard from the Brand New album. It continues to be one of the most memorable songs in this collection.

By 1981 Mickey and Becki Moore had become widely known throughout the U.S. and Canada with the release of their fourth album, Love Song For Number Two. The title song quickly rose to the number one position on many Christian radio playlists and ultimately topped off at #2 on the national charts. No independent artist had ever achieved such airplay without the backing of a major label. "Love Song For Number Two” is still Mickey and Becki’s most requested song and is often used for weddings.

The Benson Years
The success of Mickey and Becki and “Love Song For Number Two” then got the attention of major record labels. Milk and Honey Records, an imprint of the Benson Company, released the Moore’s fifth album titled Mickey and Becki Moore. Two of the songs, “God Will Provide A Way” and “You Didn’t Have To Love Me,” started climbing the charts just as Zondervan, the parent corporation of the Benson Music Group, dissolved Milk and Honey Records and placed Mickey and Becki with Greentree Records. This confusion was ultimately disastrous for the promotion of that record, but “God Will Provide A Way” remains Mickey and Becki’s second most requested song and endures today as a source of encouragement to the body of Christ.

The Benson Company then released Mickey and Becki’s children’s musical, Tell Me A Story (Before I Go To Bed), on the Impact label in 1986. Becki wrote the play which featured songs written by her and Rob Evans, a popular children’s artist and minister who was know as “The Donut Man.” Mickey and Becki’s two children sang with them and were featured soloists in this musical that was performed in churches nationwide.

Personal Priorities
At the beginning of their music career, Mickey and Becki resolved to protect their marriage from the pressures of being professional musicians. In 1988 the couple pulled back from their full-time touring schedule to devote more time to their family.

Michael, as Mickey is known today, returned to his career as a provider of graphic design services to Christian organizations through Mickey Moore Design Associates. He has won numerous international awards for his print and exhibit designs, but receives his greatest joy today through involvement in men’s ministry. Becki teaches art and 3D design at The Covenant School where she was instrumental in creating their highly diverse art program. She loves the interaction with the students and the opportunity she has to make an impact on their lives.

Today Michael and Becki continue to live out the message of their music with testimonies of God’s daily provision and direction. They minister in music at their church and, when possible, in concert. In 2007 they celebrated thirty-seven years of being each other’s “number two” love.

Websites:
MickeyAndBecki.com
External links are provided for reference purposes. Christian Music Archive is not responsible for the content of external internet sites. 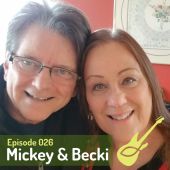 Mickey & Becki Moore were professional street singers in New York's Greenwich Village when they felt called to be part of the new Jesus Movement of the 1970s. In today's podcast, we hear the story behind the call God placed on them and how he provided despite industry roadblocks and people telling them that this wasn't a good career path.

And of course on our page: Christian Music Archive.