Carrie Hodge is listed in the credits for the following albums: 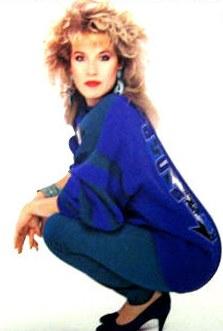 Carrie Hodge has been a member of:

Carrie McDowell Hodge (born on May 11, 1963 in Des Moines, Iowa) is a female pop\dance singer from the mid 80's. In the early 70's, Carrie was a child singing sensation, gaining attention at Bill Riley's "Talent Sprouts" contest at age 8.

On October 11, 1974, Carrie appeared on "The Tonight Show" with Johnny Carson and appeared with the late George Burns on the show. She recorded a version of "Somewhere Over the Rainbow," sang on Jerry Lewis' MDA Telethon, and opened a show with Danny Thomas in Reno, Nevada. She even performed with Liberace at the Hilton International Hotel in Las Vegas for three weeks.

Carrie's singing career took a break when her mother brought her back to Iowa to attend school. When Carrie was 18, she left for New York and then Los Angeles, and signed a record deal with Berry Gordy's record label, Motown Records.

In 1987, Carrie released her self-titled debut album. It's unknown how or if the album ever charted. Her one and only single, "Uh Uh, No No Casual Sex" was moderately successful, peaking at #38 on Billboard's Hot Dance Music\Maxi-Singles Sales chart and #65 on Billboard's Hot R&B\Hip-Hop Singles & Tracks chart.

After her one and only album, Carrie left Motown Records and married guitarist Michael Hodge in 1989. In 1991, the couple settled in Nashville. They have a son named Gabriel. Carrie and Michael are now Christian country\gospel musicians, performing under the name Two Hearts. They performed in Kenya and South Korea in 2002. They released two albums, "Give 'em the World" and "Stand Your Ground."

Carrie returns to her hometown of Des Moines for club dates and to perform on the Variety Club Telethon, making 25 appearances with the charity. In 2004, Carrie was inducted into the Iowa Rock n' Roll Music Association Hall of Fame.