Bob Hartman is listed in the credits for the following albums: 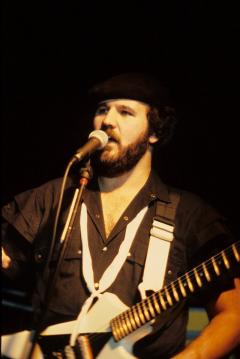 Bob Hartman has been a member of:

Robert "Bob" Hartman is a Christian artist, guitarist, writer, and songwriter. He is the founder of the Christian rock band Petra. Hartman was involved with the band from its foundation in 1972 to its end in 2005. He took a break from touring in 1995, but continued to write most of the band's songs, record guitars, and produce most of the albums. He officially returned to touring with Petra in 2003 until he decided to retire from the band in late 2005.

Bob Hartman grew up in Bryan, Ohio learned to play guitar when he was 13 years old, teaching himself from books and watching other people. He has said that two of his major influences were Joe Walsh, a member of The James Gang, and Jimi Hendrix at the time.

Hartman converted to Christianity when he was 20 after having heard about the shootings at Kent State University and asking God if he was real to reveal Himself to Hartman. God then revealed Himself to Hartman in a very real way which led to Hartman accepting Jesus Christ as his Lord and Savior. When he was 21, he joined a Christian band called Rapture with John DeGroff. During this time, he wrote some of the songs of the first Petra album. He also studied at Bowling Green State University, earning a B.A. in Psychology.

When Rapture broke up, DeGroff moved to Fort Wayne, Indiana to attend Christian Training Center (a school based in a church there). Hartman was already jamming with guitarist Greg Hough and they both moved to Indiana to attend the same school. Upon meeting drummer Bill Glover there, they formed Petra. Hartman became the principal (and most of the time, the sole) songwriter of the band, writing the lyrics and music for almost all of their songs.

In 1995, he felt he needed to take a break from touring but remained as the band de facto leader, songwriter, and producer. He also continued to play guitars on all of the albums despite not being featured on the album pictures or promotional material of the subsequent four albums - No Doubt, Petra Praise 2: We Need Jesus, God Fixation, and Double Take.

Amidst the struggles in the band during the late 90s, Hartman decided to officially return in 2001 for the release of the band's third praise album: Revival. In 2005, after much praying, he decided to retire from the band after 33 years of ministry.

After Petra's retirement, Hartman started working with former Petra singer, John Schlitt, as II Guys from Petra in an album which was released on January 26, 2007, titled Vertical Expressions.

In 2010, Hartman and other members of the early line-ups of Petra, reunited under the name Classic Petra. They released an album, Back to the Rock, with a tour that lasted until 2012.

In 2017, Hartman collaborated with missionary and guitarist Daniel Dossmann in releasing Guitar Legacy. Hartman produced, arranged, and provided electric guitar to Dossmann's acoustic guitar on the album of praise and worship songs.

Websites:
HouseofBob.com
External links are provided for reference purposes. Christian Music Archive is not responsible for the content of external internet sites.
Created by: Yianni D on 26-July-2010 - Last Edited by siremidor on 14-March-2021