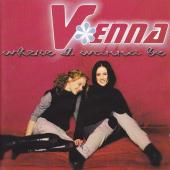 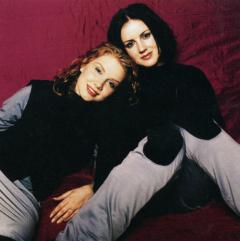 V*Enna is made up of Lucy Britten, Sharnessa Shelton, and a team of dancers that will rock your world!

Lucy Britten grew up near Bristol, England, in an old vicarage, surrounded by siblings, foster kids and pets that included sheep, chickens, fish and a dog that's also called Lucy (we're sure it's a compliment). Although she attended church and her grandfather was an archdeacon who traveled the world, living in places like Nairobi and Cyprus, her own faith grew gradually.

"I fell in with what my mum would call the wrong crowd at school. I was living for myself but not realizing it," she explains. But before returning for her second year of University, it all suddenly "clicked" and she was baptized. That year she also discovered her love for singing and there was no turning back. "It consumed me and I just thought, I don't want a regular job."

Across the Atlantic Ocean, Sharnessa Shelton was growing up in Longview, Washington, in what she describes as a "a very Christian, but not strict, home." She adds, "I was raised in a very cool environment by parents who gave me room to grow into who God wanted me to be, along with the freedom and discipline that was needed to get there."

While being homeschooled, Sharnessa nurtured her love of music and dance with tap, jazz and lyrical technique lessons, as well as participating in choir and ensemble at the local private school. Then, at 16, she directed, choreographed and produced her first show at her church. Another followed two years later. "It's a real passion for me, using the arts for God's glory. It's something I know will always be a part of my life," she says.

To further hone her skills, Sharnessa enrolled in the School of Creative Ministries in London, England. It was there that she met Mark Pennells, founder of WorldWide Message Tribe and a producer and band consultant. It was Pennells who first introduced the girls in London and the rest is history.

Quickly becoming "really good mates" with a common purpose, they moved to Manchester, England and set to work choreographing dance numbers to compliment the songs Mark Pennells and his longtime writing pal Zarc Porter composed especially for them. Within a matter of months the catchy, "Britney meets ABBA," style of the early demos caught the attention of Essential Records' President Robert Beeson, and the group soon had a Stateside partner in their ministry.

V*Enna's first release came earlier this year with their enhanced maxi-single, All the Way to Heaven. It was so popular that stores across America sold out! The infectious title track was also the girls' first radio single which was a top-ten smash hit on the Christian Hit Radio charts.

Between concert and media appearances in both America and the UK, Lucy and Sharnessa were hard at work back in Manchester recording their debut full-length project "Where I Wanna Be", also produced by Pennells and Porter, and which was released on September 26, 2000.

"When we compare All The Way To Heaven-The Enhanced Maxi Single to Where I Wanna Be, the full album is much more Euro-pop and has a lot more edge to it. It still has the same high energy sound and feel to it, but there is more attitude on the full album," says Porter.

"The entire recording process was very smooth. We really didn't know what direction the album was going to take, but when we recorded Where I Wanna Be, it set the tone and formed the direction we took," Porter explains. "Lucy and Sharnessa are such musical singers and very musically minded, which make the recording process go quickly and smoothly."

V*Enna's strong passion for both discipleship and evangelism is clear and equally yoked throughout the entire album. Where I Wanna Be's edgy and melodically driven title cut dives into the desire to emulate Christ in every aspect of our lives, whereas the straightforward approach with "Why Did I Let You Go?" and "Do You Wanna Know" falls directly into the vein of discipleship.

The girls of V*Enna are set to take both sides of the Atlantic by storm. They can finally devote more time to their fans, which is what they really enjoy doing. Now, their dual ministry focus of evangelism and discipleship can truly begin.

"We really want to see kids accept the challenge to not waste their teen years," Sharnessa explains. "I've especially seen that here in the States kids live from party to party, from mall to mall, from weekend to weekend, from boyfriend to boyfriend (or girlfriend!) and that's their focus. So much of it is superficial and that's such a waste of what could be SUCH a valuable season of life! Of course it's fine to enjoy being a teen, but I think they can be so underestimated. The teen years can be such an incredible time of growth, learning and preparation."

Lucy, remembering her own school experiences, also wants to encourage the kids they encounter to be more proactive. "I wasn't actually aware when I was making decisions. We want to show kids that if they are following the crowd, they're making decisions they may regret later. We want to make them aware that they are at an age where they can make their own decisions."

But don't try to get V*Enna to play favorites by favoring one country or type of ministry over the other. "We're excited that God has given us two avenues to go down," Sharnessa insists.

"More than anything, we want to be a bit of love in their lives," explains Lucy.

Websites:
Website: V-enna.com
External links are provided for reference purposes. Christian Music Archive is not responsible for the content of external internet sites.
Created by: mjmurphyccm on 09-March-2013 - Last Edited by admin on 07-January-2016