Ted Kirkpatrick is listed in the credits for the following albums: 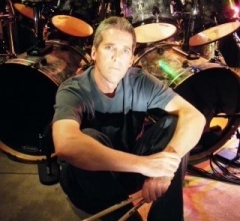 Ted Kirkpatrick has been a member of:

Ted Kirkpatrick was an American musician and songwriter best known for his work with the American Christian thrash metal band Tourniquet. Primarily a drummer, Kirkpatrick was the principal songwriter for the band and played other instruments as necessary.

Kirkpatrick started as a touring drummer for the doom metal band Trouble in 1987 and played a few shows with the group. However, he soon left Trouble as he could not meet its touring commitments. In 1989, he formed the group Tourniquet with Guy Ritter and Gary Lenaire. The group performed a highly progressive thrash and speed metal style, informed by Kirkpatrick's love of classical music.

In addition to his work in Trouble and Tourniquet, Kirkpatrick independently recorded and released several solo recordings, including a stoner metal album and In the Shadow of the Masters, an album where Kirkpatrick drums to various classical recordings.

Kirkpatrick died from idiopathic pulmonary fibrosis on August 19, 2022, at age 62.