Glen Payne is listed in the credits for the following albums: 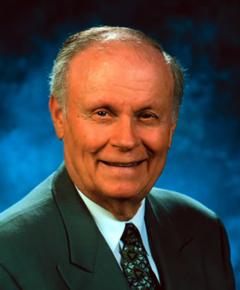 Glen Payne has been a member of:

Glen Payne served for fifty-five years as a Southern gospel music singer. He is known for being the lead singer of The Cathedral Quartet.

Payne was a child of the Great Depression. His parents were cotton farmers in Texas. At age 17 in 1944, he joined the Stamps-Baxter Quartet. Payne was also a member of the Lester Stamps Quartet, The Stamps All-Stars, and The Stamps-Ozark Quartet. In 1956, he joined The Weatherford Quartet, which featured Glen, Earl and Lily Fern Weatherford, Armond Morales, and George Younce. Younce was later replaced by Henry Slaughter.

In 1963, Weatherfords members Glen, Bobby Clark, and Danny Koker departed to work for evangelist Rex Humbard at the Cathedral of Tomorrow in Akron, Ohio. Together, they formed the Cathedral Trio. With the addition of bass singer George Younce a year later, the Cathedral Trio became the Cathedral Quartet. The Cathedrals immediately became a sensation with their smooth quartet sound. Over the next 36 years, the Cathedrals won numerous Singing News Fan Awards and had several number one hits on the Southern Gospel Charts including "Step into The Water," "Boundless Love," and "He Made a Change." While the quartet saw several different people hold the tenor, baritone and pianist positions, Payne and Younce remained the guiding forces of the quartet until Glen's death in 1999 during the Cathedral's farewell retirement tour. Payne and Younce were the only lead and bass singers the Cathedrals ever had.

Glen was the willing "target" of many of MC George's jokes and icebreakers during the quartet's run. George often referred to Glen as "The Old Man". Glen's signature song was We Shall See Jesus.

Glen sat as a member of the Board of Directors of the National Quartet Convention and the Southern Gospel Museum and Hall of Fame for many years, being enshrined in the SGMA Hall of Fame at Dollywood in Pigeon Forge, Tennessee itself in 1998.

Glen died due to complications from cancer in October 1999 during the Cathedral's farewell tour. Although unable to attend that year, Glen made his final performance at the National Quartet Convention via telephone hook-up from his hospital bed at Vanderbilt Hospital. During this Cathedral's appearance at NQC, Glen talked with George and the audience over the phone and, at George's behest, sang the old hymn I Won't Have To Cross Jordan Alone in one of the most memorable NQC performances of all time. It was the final time Glen would perform publicly with the Cathedrals. Payne was married and had three children and three grandchildren.