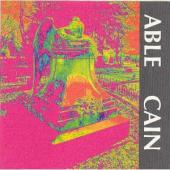 Able Cain has until recently been a very well kept secret among Northern Californians. With the band’s participation on Mootown Records’ “Tastes Like Chicken” compilation CD and the release of the band’s own self-titled debut CD EP, the cat is being let out of the bag.

Fans of the Police, Simple Minds, and in particular, the Fixx, take note. Able Cain draws from these sources, and updates the mix into something that is ready for a modern, post-grunge scene in which the groove abounds.

Able Cain’s strengths lie in well-crafted, sophisticated rock/pop song writing, and skillful instrumental arrangement. With a line-up including singer, guitar, keyboard, bass, and drums, the band has developed a style of interplay that renders each member indispensable.

Matt McCabe’s guitar playing is full of character, and escapes the boundaries of simple overdriven power chord hammering that many young bands and fans settle for in current ACM. McCabe and keyboardist Eric Schrepel play in true support of each other in creating the sonic bed of Able Cain, with neither acting as a strictly lead or rhythm instrument.

Vocalist Greg Asher’s soulful, intelligent lyrics are matched by passionate delivery. The band’s Mootown offering, “Fire Flower”, is an excellent introduction to Asher’s commanding, gravel-etched baritone. He sings with fervor of a vision of beauty and purity caught up and brought low by addiction. The cry “rage out your rage” is one of longing, pain, and defiance.

Asher’s focus turns inward during “Charlatan’s Song.” The singer pulls himself down from any pedestals to declare that he’s anything but a role model…

“I’ve found no truth outside of salvation; nothing to set me free. And who am I to speak condemnation? The worst of men is me.”

It’s clear, however, that he’s giving it his best shot.