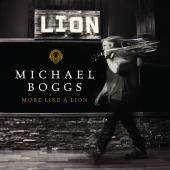 Michael Boggs is listed in the credits for the following albums: 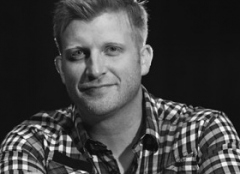 Michael Boggs has been a member of:

Sometimes the people God chooses are the ones who never planned to be chosen. Witness the story of Michael Boggs, an accomplished multi-format musician, singer, and songwriter. With his debut release on Stylos Records, More Like a Lion, Boggs is turning heads with songs of conviction, exhortation, and heartfelt praise. He’s toured the world, become a sought-after songwriter, and leads worship for thousands, though Boggs never planned it that way.

Growing up, he was convinced he’d be a professional athlete. By the time college came along, he had a spot waiting for him to play football for a big-name university. So how did he end up an award-winning musician? He never took music lessons, never sent demo tapes to record labels, but when God came calling with His plan for Boggs, Michael took that most important step: he listened and obeyed. Boggs felt a call to attend a tiny Bible college in Oklahoma that didn’t even have a football team, and so he went.

Boggs grew up in a musical home, and though they never spoke much of it, his parents were actually prominent country musicians before he was born. Despite this environment, Boggs still thought of music as nothing more than an enjoyable pastime. A pivotal day arrived at that tiny Bible college, when a friend approached Boggs with a bit of an emergency. “We need someone to lead music in chapel tomorrow,” he stated. “Can you do it?” Boggs informed his friend that he only knew how to play three songs on his guitar. “That’s enough!” the friend replied. “Play those three!”

Eventually, Boggs found himself leading worship and even traveling when he was noticed by the band FFH. A guitarist had recently decided to step away, and against all odds (just the way God likes it), Boggs was invited to join. He quickly offered more than just a natural talent for guitar, as the songs he wrote became hits. Boggs was growing as a songwriter of depth and versatility, and it wasn’t long until his songs had been recorded by artists in genres like country (Alison Krauss, Diamond Rio), Christian AC (Big Daddy Weave, Matt Maher), and Gospel and Southern Gospel (Anthony Evans, Jason Crabb). These great songs, and a string of awards (multiple Dove Awards, CCM songwriter of the year, ASCAP awards), were a far cry from the baseball diamond or the gridiron, but God had even more in store.

When FFH stopped traveling, friends encouraged Boggs to make his own music. A hymns collection (a present for his mother) and a live worship record followed before and his first solo independent release, More than Moved. Looking back, it’s easy to see how God placed all these little moments in Boggs’ path to prepare him for his latest collection of remarkable songs. The final piece was put in place during a prayer retreat with his church staff. “This quiet voice in my heart at the end of that prayer time said, ‘Michael, I want you to be more like a lion and less like a lamb.’ I felt like the Lord was impressing on me that he wanted me to be brave in this next season of life, and if I had a choice to be brave or passive, I should choose bravery.”

That bravery is evident throughout Boggs’ latest, More Like a Lion. “That theme started running through everything from my conversations with people to the songs I was writing,” Boggs recalls. “I’d encounter a line in a song that, in the past, I might not have said for fear that people would take it the wrong way or that they wouldn’t understand it. Now I’ve just declared that I feel like this is what I need to say and I’m going to say it. There are a couple of songs on the record that I don’t know if I would’ve released four years ago.”

A prime example is lead single “What Would Jesus Undo”. The song is almost startling from its opening line, “Would God un-preach every sermon spoken in hatred?”, to its moving chorus, “I wonder if He shakes His head and thinks, ‘That’s not what I meant.’ What does hurting the hurting prove?” It’s a song of conviction that will challenge Christians and their churches to examine ways in which our actions and practices might actually be hurting more than helping. “I think the world isn’t really upset that we’re too much like Jesus. The world is upset that we’re not enough like Jesus.” The powerful thought inspired both the song and a book of the same title Boggs is currently writing. “It was humbling and sad to say, but I could write a whole book on what Jesus would undo in me. There are homeless people in Nashville who sleep on the grates in streets just because they vent a little warm air. I would not be able to undo hunger for a lifetime but I could undo it for one day. I can bring that guy sandwich.” Not content just to share these thoughts with others, Boggs has partnered with Feed the Children to undo hunger and poverty, and he’s giving the song away via the organization’s website.

Another challenging and inspiring song is “Turn Around”, which was a Top 10 hit for over 16 weeks for co-writer Matt Maher. Boggs’ version has a decided country flavor under the lyrics that have touched the lives of so many on their paths to recovery. The rollicking “Alive” is based on a familiar quote: “Jesus didn’t come to make bad people good, he came to make dead people alive.” To highlight the bright light of life in Christ, the song is preceded by a dark, funereal Scripture reading culminating in a powerful question from John 11:26: “Do you believe this?”

Listeners are immediately connecting with “Our Hallelujah”, a song of triumphant declaration of unwavering praise. “When people have one of those days when nothing is going right,” Boggs explains, “when you just wish you could hit reset on that day, it’s such a gift to be able to sing that: Who could ever take our hallelujah? No storm could ever shake our hallelujah. We will not forsake our hallelujah.” The song actually came along so late in the recording process that Boggs and producer Brandon Hood (Sidewalk Prophets, Point of Grace) recorded just about all the music themselves, including four different kinds of guitars

The song that signals perhaps the album’s most touching moment is “We Will Sing Jesus”. It was written for Boggs’ pastor when he was diagnosed with cancer and longed for a song of praise to balance out the bad news. Boggs recalled a moment when he was a child, afraid in the dark, seeking the refuge of his parents’ room. His mother gently told him that when she was afraid, she would just sing the name of Jesus. The sweet memory led Boggs to write a song of profound comfort, not unlike a Psalm that changes hearts from fear and trouble to victory and praise.

Michael Boggs might not have planned for a career in music ministry, but he’d be the first to tell you that God’s plans are so much better than ours. Through songs that heal, convict, and speak love and bravery directly into people’s hearts, God is using Boggs to minister every day, and to lead others on their own surprising journeys of faith.