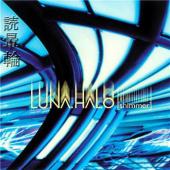 Luna Halo is a rock band formed in 1999 by Nathan Barlowe and Jonny MacIntosh, as a replacement for their former band, Reality Check, which was well known for its hip-hop and rock blend, its dancers, and its trumpet player.

In 2000 Luna Halo, fronted by former Reality Check front man Nathan Barlowe, released their debut CD Shimmer on Christian music label Sparrow Records. Although Shimmer was praised by critics, Luna Halo left Sparrow Records and the Christian music industry behind before recording their next album due to creative differences. The current version of Luna Halo contains different members from the earlier version of Luna Halo, and although several of the band members claim to be Christians, they say have left the 'Christian band' moniker behind. Nate Barlowe has said that they only kept the name to sustain bookings at churches while the band made itself known in rock clubs.

Rumors of an imminent Major label deal began to surface in 2004, and a deal with DreamWorks, was announced prematurely, but later proved to be untrue (the band had not officially signed.) The band released another EP, Wasting Away (originally recorded as a demo for DreamWorks) and opened a few shows for artists Velvet Revolver, Hoobastank, Collective Soul, Ours, Needtobreathe and Family Force 5.

On June 18, 2008, the band released a statement stating that drummer Chris Coleman was leaving the band to take a break from music and go back to school. In November, Jonathan Smith (the original Luna Halo drummer) rejoined the band.

In May 2008, the band shot a music video for the song "World On Fire", directed by Chris Grieder alongside Flying Dog Films.

On November 24, 2008, the band released a statement via MySpace stating that Aaron Jenkins would be leaving the band, because he was expecting the birth of his second child. On December 16, the band announced Victor Broden as their new bass player.

On November 13, 2012, lead singer Nathan Barlowe announced that Luna Halo would be playing their final show on December 8, 2012 at 12th and Porter in Nashville, TN. This show would mark not only the band's final show, but also their twelve-year anniversary celebration.