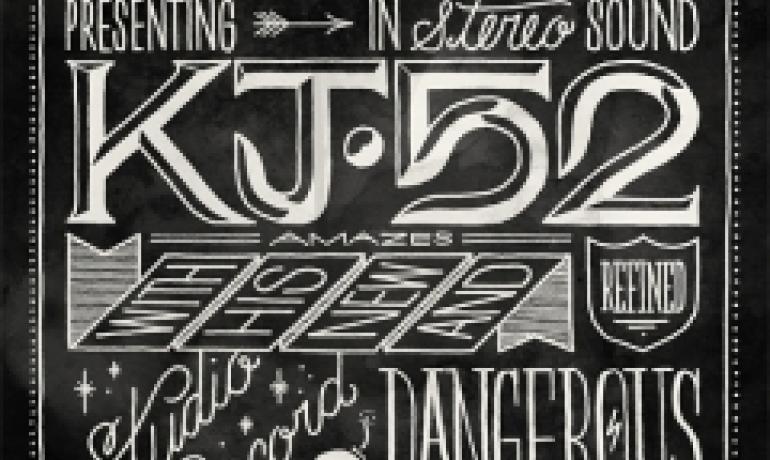 Dangerous comes after 11 years in the music industry and more than 575,000 albums sold for this hip-hop veteran. In addition to KJ overseeing the album, it includes tag teams with producers Tedd T. (Mute Math, Delirious) and Aaron Sprinkle (Deftones, Hawk Nelson, Jeremy Camp). Fans will recognize the special guest vocals, which include GRAMMY®-nominated Lecrae (“They Like Me”) Canton Jones ("It's Going Down"), Dre Murray ("That Was My Life"), George Moss ("Do the Bill Cosby"), Thi'sl ("Shake 'Em Up") Rhema Soul ("Speed That Light") and Emily of Shine Bright Baby ("So Far Apart").

Here is what the media are saying about KJ-52’s latest effort:

"KJ-52 can be unapologetically straightforward about faith. His latest has the high production value of something like Kanye West or the Black Eyed Peas, but the subject matter is youth-group ready."
- Christianity Today

"His seventh solo album, Dangerous brings with it every reason why he is still at the top of his game."
- ChristianMusicZine

"This release is filled with Christ-driven themes, fun-laced flavor, and sweet beats that are worthy to played at any house party."
- JesusFreakHideout.com

"Kj-52 is a pro at blending humor, hope, and depth into every album, while still keeping the energy of hip-hop alive and movin’. Just like the artist who created it, Dangerous is diverse and unlike any other in its genre. It’s clear that even after eleven years of creating music, KJ-52 hasn’t lost a beat."
- NewReleaseTuesday.com

KJ-52 is taking this new album on the road for the upcoming 4thirty1 Experience.