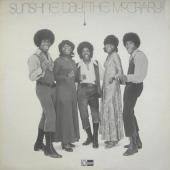 The McCrarys are an American family Gospel and R&B group best known for the songs "You" (featuring Stevie Wonder on harmonica), "Lost in Loving You," "Love on a Summer Night" and "Any Ol' Sunday" (later covered by Chaka Khan).

Originally from Youngstown, Ohio, the family recording act consisted of siblings Linda, Alfred, Charity, Sam and Howard McCrary. In 1972, the quintet released a gospel album, Sunshine Day on Light Records. When the group moved from gospel to secular music in the mid-1970s, Howard left the group to continue in gospel. The group released their first album Emerge on Cat's Eye records in 1973, featuring the title song along with Kung Fu, Be A Father To Your Son, 6 other McCrary tunes and You've Got A Friend.

The group relocated to Los Angeles and recorded a series of R&B albums in the late 1970s and early 1980s. Their biggest hit was "You" (written by Alfred, Linda and Sam McCrary), which featured harmonica by Stevie Wonder. A huge R&B single, the song also achieved significant airplay on Pop radio stations, peaking just below the Top 40. It was featured on their debut Portrait album, Loving is Living.