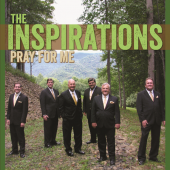 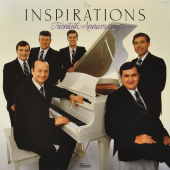 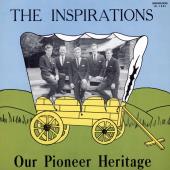 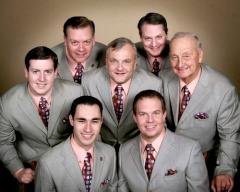 Martin Cook, a former piano player for the Kingsmen and a chemistry teacher at Swain High School in Bryson City, NC, formed the Inspirations in 1964 with several of his teenage students: Archie Watkins, Ronnie Hutchins, Jack Laws and Dean Robinson. The Inspirations became full-time in 1969, a year after hosting their first “Singing In The Smokies” event. Bass singer Mike Holcomb joined them in 1972.

The 1970s saw the Inspirations rise to national attention with a number of hit songs. Their sound was defined by the piercing tenor vocals of Archie Watkins and the booming bass of Mike Holcomb. The group was also invited to be part of the regular cast on the Gospel Singing Jubilee television program. They had the very first number one song on the Singing News chart in January of 1970 with “Jesus Is Coming Soon.” (This honor was shared with three other groups who had different versions of the same song.) Beginning in November 1973, the group had the top song for 12 months in a row. “Touring That City” held the position through February 1974 and “When I Wake Up To Sleep No More” was the most popular song for the next seven months. “Jesus Is Mine” was also a number one song for the group in 1976.

The Inspirations continued to present concerts with a traditional style and a conservative image in the 1980s, 1990s and 2000s. Songs like “Cry For The Children” and “We Need To Thank God” resounded strongly with Christian conservatives and fans of traditional gospel music. For most of the 2000s, the members of the Inspirations were Archie Watkins, Matt Dibler, Melton Campbell, Mike Holcomb, Martin Cook and Myron Cook. The Inspirations returned to the top position on the Singing News chart in 2002 after a 26-year absence with “I’ll Not Turn My Back On Him Now.” "I Have Not Forgotten" (April 2007) and "If You Only Knew" (November 2007) were also number one songs for the Inspirations during the 2000s.

Long-time bass singer Mike Holcomb left the Inspirations in 2013 after a 41-year tenure. Jon Epley moved from baritone to fill the bass spot, opening the way for the return of former baritone Melton Campbell. In 2015, Epley left to join the Ball Brothers and was replaced by former Diplomats bass singer Joe Brown.

Websites:
TheInspirations.com
Facebook: TheInspirations
External links are provided for reference purposes. Christian Music Archive is not responsible for the content of external internet sites.
Created by: siremidor on 29-February-2016 - Last Edited by siremidor on 11-April-2016