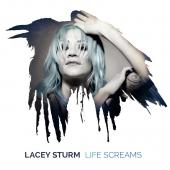 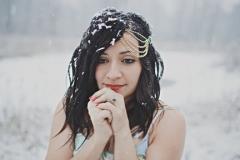 Lacey Nicole Sturm (née Mosley) is an American singer-songwriter from Arlington, Texas. She is co-founder and former lead vocalist of the hard rock band Flyleaf.

Sturm has a role in the Billy Graham Evangelistic Association's worldwide video, The Cross, released in November 2013. Lecrae and Sturm share the video in honor of Graham's 95th birthday. She sings the final song: "Mercy Tree". An accompanying album, My Hope, on which Sturm has two songs, "The Reason" and "Mercy Tree" was released.

Sturm has previously been involved with Hot Topic, modeling for their clothing line LOVEsick.

Shortly after giving birth to her second son in August 2013, Sturm embarked on a nationwide speaking tour with Nick Hall of PULSE, a Twin Cities-based nonprofit organization. The Reset Movement is described on their website as empowering a generation to live fully for Jesus.

Sturm was a guest vocalist on the 2013 track "Take the Bullets Away" by We as Human.

In September 2014 Lacey Sturm's book The Reason: How I Discovered a Life Worth Living was published. Sturm's book is an autobiography about her struggles in life, how she overcame them, and inspiration to those who are struggling themselves. "The day Lacey Sturm planned to kill herself was the day her old life ended. As an atheist who hated Christians, she thought church was a place for hypocrites, fakers, and simpletons. After a screaming match with her grandmother, she ended up in the back of a sanctuary, hating everyone in the room. But what happened in that room is The Reason she is alive today."

On October 13, 2014 Lacey announced via social media; Instagram, Twitter, and Facebook, that she had a new band that was being put together. "[We're working on] solo project and we are calling it Lacey. The brilliant drummer Tom Gascon, amazing bassist Ben Hull, my husband Josh Sturm who's an awesome guitarist and I have written some of my favorite heavy rock songs ever. And we will be rocking them for you tomorrow night! I can't wait!" The band is premiering October 14 at The Blind Tiger in Greensboro, North Carolina.