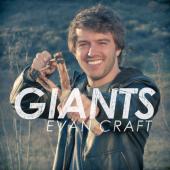 Evan Craft is a Christian singer and songwriter, best known for original praise and worship songs in both English and Spanish. Evan began playing guitar at the age of 12 and was writing his own songs and performing by the time he was in high school. He self-released several albums and EPs and distributed them at shows.

Evan also undertook a serious study of Spanish during his adolescence, developing a proficiency that allowed him to ably assist his father in running a homeless shelter in Los Angeles. He furthered his linguistic studies in college, attending schools in Spain and Costa Rica. He also began writing songs in Spanish. His debut Spanish-language album, Yo Soy Segundo, was released in 2012 on Dream Records and distributed through Universal. He followed it by joining with friends and fellow musicians Sean and Ryan Cook and Nico Aranda; they traveled and delivered an evangelical message through their performances in numerous Spanish churches, schools, and orphanages.

Considering this to be his mission in life and his best way to serve God, Evan began posting videos to YouTube and issuing Spanish translations of his English songs as well as Spanish covers of popular English worship tunes. As a result, Y Soy Segundo landed on various Christian radio and download charts. He followed it with the album Jovenes Somos in 2014.

His YouTube presence exploded and created a popular demand that allowed him to tour churches and other venues all across Latin America through the rest of that year and into 2015. Returning home during the winter, he began recording a new album of congregational anthems. Entitled Principio Y Fin, the 19-song set on Essancy Music was released in July 2015. It was comprised of original material and featured a duet with Carlos PenaVega on the charting title track, as well as collaborations with other artists including Danilo Montero, Ingrid Rosario, Seth Condrey, and "Un Corazon" with Lluvia Richards.

Websites:
Website: evancraftmusic.com
Twitter: @EvanCraft
External links are provided for reference purposes. Christian Music Archive is not responsible for the content of external internet sites.
Created by: siremidor on 29-March-2012 - Last Edited by siremidor on 20-January-2020