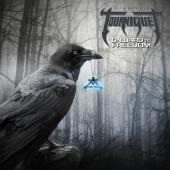 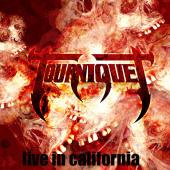 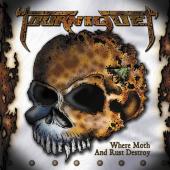 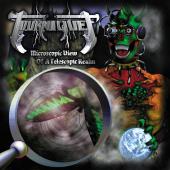 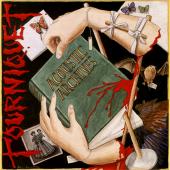 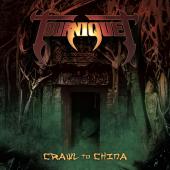 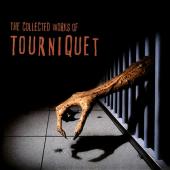 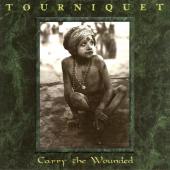 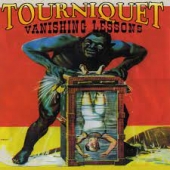 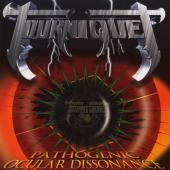 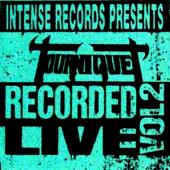 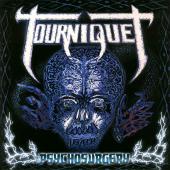 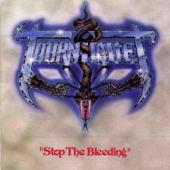 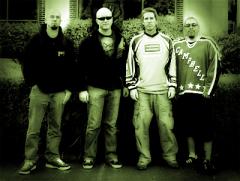 Tourniquet is a Christian metal band that was formed in 1989 by Ted Kirkpatrick, Guy Ritter and Gary Lenaire in Los Angeles, California, United States. The band primarily performs a mixture of thrash, neoclassical and progressive metal, and is influenced by additional, non-rock forms of music such as classical and world music. It has earned six GMA Dove Award nominations and won multiple recognitions from the readers of HM Magazine, including "Favorite Band of the 1990s" and "Favorite Album of the 1990s" for Pathogenic Ocular Dissonance. It has released seven studio albums, one compilation album, one EP, one acoustic album, five video releases and three DVDs, and sold more than 300,000 albums. In addition to its use of classical music, the band is known for frequently using medical terminology in its album and song titles and lyrics.

The band is named for the tourniquet, "a surgical device for arresting hemorrhage by compression of a blood vessel." According to the band, a tourniquet is a metaphor for "a lifelong spiritual process by which a personal God, through the atoning blood, death, and resurrection of His only Son—Jesus Christ—can begin to stop the flow of going through life without knowing and serving our Creator. He is our Tourniquet."

Classic line up (1990–1993)
Tourniquet was formed in 1989 by drummer Ted Kirkpatrick, vocalist Guy Ritter, and guitarist/vocalist Gary Lenaire. Kirkpatrick had previously played in the Chicago doom metal group Trouble on their Run to the Light tour. The group was one of many bands who were, at the time, affiliated with a church group called Sanctuary - the rock and roll refuge in Los Angeles.

Tourniquet released its first studio album Stop the Bleeding in 1990. It was produced by Bill Metoyer of Metal Blade Records, and released by Intense Records. While it was mostly distributed to Christian bookstores, Stop the Bleeding gained some notoriety in the mainstream metal scene, and is considered a notable thrash metal album. Tourniquet's style broke new ground and quickly gained them fans all over the world. Musically, the album showcased elements of 1980's speed metal with its Mercyful Fate/King Diamond influences, notably the falsetto vocals. In this line up, Guy Ritter sang the melodic vocal parts while Gary Lenaire did the aggressive, thrash metal shouts. Session guitarist Mark Lewis played lead guitars on the album. The band was later rounded out with the addition of bassist Victor Macias and lead guitarist Erik Mendez. This version of the group is commonly known as the "classic" line up of Tourniquet. The band, including Macias and Mendez, filmed a music video for the song "Ark of Suffering". The video had some limited airplay on MTV, but it was quickly pulled by the network due to violent content portraying animal abuse. Because of the song and its subsequent video, the band became known for its stance on animal rights.

In 1991, Tourniquet abandoned most of its 1980's metal influences and recorded a more modern sounding album titled Psycho Surgery. On the song "Spineless", the band experimented with rap rock in the vein of Anthrax and Faith No More long before the style became popular in the late 1990s. Psycho Surgeryshowcased Kirkpatrick's classical music influences more prominently than Stop the Bleeding, and his background in the pharmaceutical industry became apparent with many of the song's lyrics utilizing medical terminology as metaphors for social/spiritual issues. Some critics described it as if "Slayer plays Beethoven in a slightly rewritten way". On Psycho Surgery Tourniquet continued to work with producer Bill Metoyer, and signed a distribution agreement with Metal Blade Records. Metal Blade released Psycho Surgery to a wider general market audience than the band had been able to reach with Stop the Bleeding. Intense Records released Psycho Surgery to Christian retail.

Heavy metal / hard rock era (1994–1999)
In 1994, Tourniquet abandoned most of the medical terminology in their lyrics, altered their style to a more accessible heavy metal / hard rock sound and released Vanishing Lessons. Erik Mendez had left the band after the tour for Pathogenic Ocular Dissonance, and so Vanishing Lessons was recorded by Tourniquet as a four-piece band. Soon after the album's completion, Aaron Guerra joined Tourniquet as Mendez's replacement. Metal Blade Records opted to not distribute Vanishing Lessons, and Tourniquet continued to work exclusively with Intense Records until 1997. The album spawned the single "Twilight", which became the band's first CCM radio hit. A video was shot for the song "Bearing Gruesome Cargo", and was later released on the home video release Pushin' Broom (1995).

Shortly after the release of Vanishing Lessons, the band released an EP titled Carry the Wounded in 1995. Some Tourniquet fans had mixed feelings toward the EP's softer sound and the inclusion of a ballad. Later the band released a compilation album titled The Collected Works of Tourniquet which included the new songs "The Hand Trembler" and "Perfect Night for a Hanging". Many fans regard these as the heaviest songs Tourniquet has ever written.

In 1996, Victor Macias left the band of his own accord due to theological differences. Later that same year, Gary Lenaire was asked to leave Tourniquet.

In 1997, the band signed with Benson Records and released Crawl to China. Crawl to China generated divided opinions with both critics and fans because of its diverse, experimental material.

Ted Kirkpatrick is known for his drum solos, and he performs them in nearly every Tourniquet concert. Many of these performances had been filmed, and in 1997 these clips were compiled on a home video release (VHS) titled The Unreleased Drum Solos of Ted Kirkpatrick.

In 1998 the band recorded a number of songs in acoustic form, and released them on an album titled Acoustic Archives. This release also included a new song titled "Trivializing the Momentous, Complicating the Obvious". That same year, Tourniquet released two home videos (VHS) titled Guitar Instructional Video and Tourniquet Live in California.

Return to thrash metal (2000–present)
In 2000, Tourniquet began writing more thrash oriented songs again. They signed directly to Metal Blade Records, and began work on their most technical album since Pathogenic Ocular Dissonance, Microscopic View of a Telescopic Realm. The aforementioned albums generated comparisons to each other, and Microscopic View of a Telescopic Realm contained a sequel to the Pathogenic Ocular Dissonance song "The Skeezix Dilemma" titled "The Skeezix Dilemma Part II - The Improbable Testimony of the Pipsisewah". The album received rave reviews from both fans and critics.

In 2001, Tourniquet reissued its first three albums, remastered and containing bonus tracks, on Pathogenic Records. In 2002, bassist Steve Andino - after filling in live for the band on many occasions - became an official member of Tourniquet. The band played various live venues until Aaron Guerra left the band for personal reasons.

In 2003, Ted Kirkpatrick, Luke Easter and Steve Andino recorded Tourniquet's eleventh studio album, Where Moth and Rust Destroy, with the help of guitarists Marty Friedman (ex-Megadeth) and Bruce Franklin (Trouble). This release continues the technical and progressive direction of their previous album. The songs "Restoring the Locust Years" and "A Ghost at the Wheel" received some radio play. That same year, Tourniquet released two DVDs. The first, Ocular Digital, includes a live show from their 2001 performance at a Dutch festival called Flevo, and a concert from 1991 in Escondido, California - the first Tourniquet concert ever. The second DVD release, titled Circadian Rhythms – The Drumming World of Ted Kirkpatrick, included many newly recorded drum solos as well as a DVD version of The Unreleased Drum Solos of Ted Kirkpatrick. This release also featured segments in which Ted, at his home and around town, answers questions from fans, and takes the viewer on a partial tour of his vast collection of butterflies and insects.

Aaron Guerra returned to Tourniquet in 2005, and they began to make sporadic appearances at concert events both in the U.S. and abroad. Notable shows include the Elements of Rock festival in Switzerland and Bobfest in Sweden. The Bobfest appearance was released on DVD in 2006 as Till Sverige Med Kärlek (Swedish for "To Sweden With Love").

On February 22, 2010, Blabbermouth.net reported that Tourniquet will record a new album in spring with noted producer Neil Kernon. The band stated, "We plan to release it as soon as it's finished in fall of this year." Kirkpatrick also announced plans to release solo albums of stoner metal and drumming over classical music. On November 10, Tourniquet announced a parthership with Kickstarter.com to fund the album's recording with fan packages and experiences for anyone who contributes toward the new album budget. On May 21, 2012, a contest concluded where a fan guessed the new album name from a series of clues. The band announced, via their Facebook page, that next album will be called Antiseptic Bloodbath.

Music
Tourniquet's early albums are technical thrash metal and are characterized by dark atmosphere. The song writing is technically precise, and drummer Ted Kirkpatrick is known to play the guitar parts himself when he thinks that the other members' playing isn't precise enough. Kirkpatrick's drumming incorporates poly-rhythms and peculiar, technical patterns. Many Tourniquet songs are said to include more guitar riffs than most bands write in their entire career. Their first album is influenced by 1980s speed metal, but on later releases the band began incorporating more classical music in their songwriting, most notably on the albums Psycho Surgery and Pathogenic Ocular Dissonance. This is mostly due to Ted Kirkpatrick's role as the main songwriter. Kirkpatrick cites Beethoven, Bach, and other classical composers as some of his primary musical influences. While there are some progressive elements on Pathogenic, such as on "The Skeezix Dilemma", their later releases Microscopic View of a Telescopic Realm and Where Moth and Rust Destroy have more marked progressive metal influences.

Tourniquet's lyrical influences span a wide range; ranging from Old Testament narrative, to medical allegories, to Edgar Allan Poe type descriptive horror. Many Kirkpatrick-penned lyrics incorporate medical terminology. Tourniquet has also dealt with unique social issues as well. "Ark of Suffering" from their very first release, Stop the Bleeding, generated a lot of attention by addressing animal abuse. "Ruminating Virulence" (from Pathogenic Ocular Dissonance) discusses the severely disabled. "Twilight" (from Vanishing Lessons) addresses the neglect of the elderly. All of these topics are addressed from a Biblical perspective.

Accomplishments
Due to the band's worldwide popularity, Tourniquet has performed in the US, Canada, Norway, Sweden, The Netherlands, Denmark, Germany, Brazil and Puerto Rico. Their music has received notice in the mainstream media, as well as the CCM market. The music video for "Ark of Suffering" received airplay on MTV, and garnered attention for its stance on animal abuse. Tourniquet has continued to take a very public stance on this issue, and so have been interviewed about it in magazines such as Vegetarian Times, Journal of the United Animal Nations, Animal’s Agenda and by PETA. Some critics have described them as being more proficient than many of their counterparts, and the band members have appeared in many music magazines. For example, Kirkpatrick has been featured on Modern Drummer, Drums, and Aaron Guerra has been interviewed in Guitar World and Guitar for the Practicing Musician.

Websites:
Tourniquet.net
Facebook: Tourniquet
External links are provided for reference purposes. Christian Music Archive is not responsible for the content of external internet sites.
Created by: Yianni D on 26-July-2010 - Last Edited by siremidor on 29-August-2022