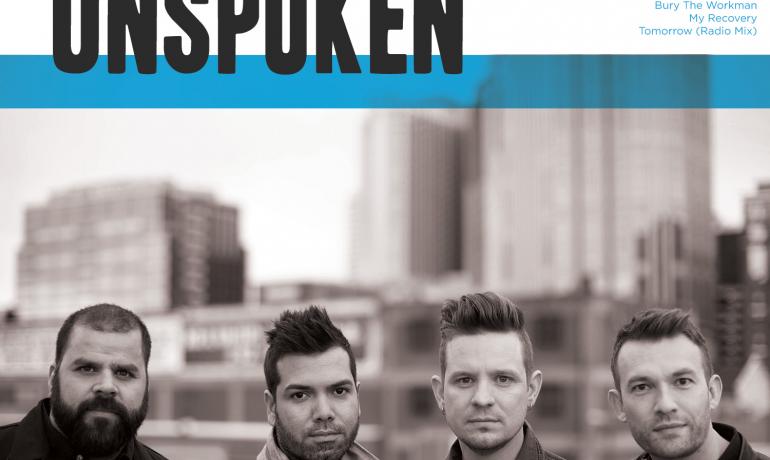 Nashville, TN - Centricity Music has developed a unique marketing plan in support of Unspoken’s first full album for the label. The self-titled project will release April 1, 2014 and comes on the heels of two Top 5 radio hits, “Who You Are,” and “Lift My Life Up,” along with two successful 5-song EPs. Unspoken features six new songs that were written or co-written by the band members, along with six previously recorded songs and a radio mix version of the new tune, “Tomorrow.” Unspoken marks the first time that any music from the band will be available at retail, as the previous EPs were only available for purchase online. The bold and innovative two year marketing plan has created a successful name brand with the public and industry before introducing the first full album by the group.

“The journey Unspoken took to get to this release is unprecedented,” says Steve Ford, Vice President of Marketing, Centricity Music. “They have spent the last two years building fans through touring and radio airplay, along with online and face-to-face connections. The band has developed into a key new artist at radio by scoring two Top 5 singles, and has developed numerous fans while touring over the last two years. Unspoken has an amazing work ethic that has paid off with an incredible pop record. I can’t wait for their fans to hear it.”

Unspoken was produced by award-winning producer, Seth Mosley (Newsboys, Francesca Bastistelli), with the exception of “Who You Are" which was produced by Jason Walker (Audio Adrenaline). Unspoken shows the continued growth of the band with stellar new songs that include; “Good Fight,” “Call It Grace,” “Real Thing,” “My Recovery,” and “Start A Fire,” which will be the first single from the new album and will go for adds at radio April 11th.  Besides featuring the two Top 5 singles,Unspoken spotlights popular songs from the two EPs such as, “Bury The Workman,” “In Your Hands,” and “Walking Away.”

“The timing feels perfect for us to release our first full-length album,” says Chad Mattson, lead singer for Unspoken. “We got to complete the pieces of what a record could and should have musically, but more importantly, the message of the songs brings us back to the basics of faith. The more success you get, or the more wealth, or whatever it is, it never seems to satisfy like you want. God has set it up so we realize that He is the biggest blessing. It’s what changed my life 11 years ago, and what continues to change my life now.”