Skillet expands "The Unleashed Tour" to Europe and Russia 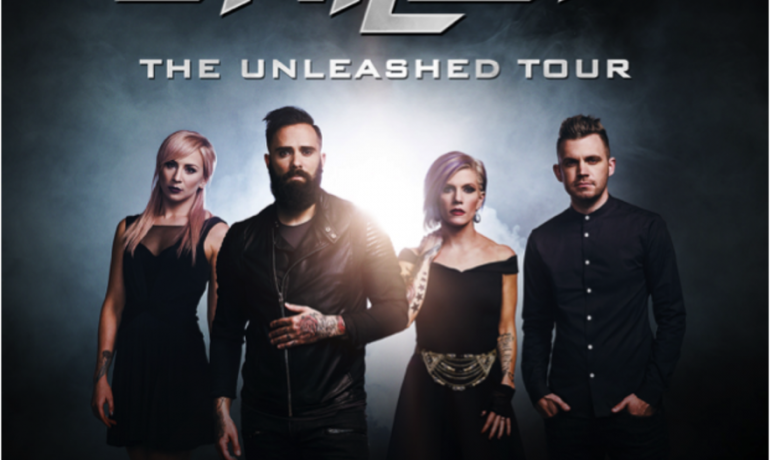 Nashville, Tenn.: Grammy-nominated rockers Skillet have expanded “The Unleashed Tour” with additional stops throughout Europe and Russia this Fall. The new string of dates will kick off on November 6th in Paris, France and take the band through Europe and Russia before ending on December 9th in London, UK. Red Sun Rising will be joining the band on the international tour. These new dates come after the recently announced U.S. leg that kicks off on September 22nd in Clive, IA.  The tour is in support of Skillet’s first album in three years, Unleashed, which will be released on August 5th.  Tickets and VIP Packages are now open to the public and available for the US Tour dates at http://tickets.warnermusic.com/eventperformances.asp?evt=32 and for European/Russian dates at http://www.seetickets.com/go/skillet.

Unleashed is the follow up to the band’s critically acclaimed, gold-certified 2013 release, Rise. NewReleaseToday recently raved, “it's a record worth buying and cranking up in the car with your friends-- and it proves Skillet's continued ability to successfully reinvent themselves.” Those who have pre-ordered the album have already received “Feel Invincible,” “Back From The Dead” and “Stars” from the upcoming release. Another track, “I Want To Live,” has just been made available as an instant download. The 12-track album, still available for pre-order via all digital retailers including iTunes at: www.smarturl.it/SkilletUnleashed and Amazon.com at: www.smarturl.it/SkilletUnleashed_A. The first singles have been moving up the charts with “Feel Invincible" holding the No. 1 spot on Christian Rock (Mediabase) for six weeks, with "Stars" climbing into the Top 10 on the Christian CHR chart. Not only a success at radio, "Feel Invincible" has been viewed over 5-million times on YouTube (https://youtu.be/Qzw6A2WC5Qo).

Tickets for the U.S. dates of The Unleashed Tour are currently available. The tour will feature Thousand Foot Krutch on the first half of the U.S. run and Sick Puppies will finish the second half of the tour. Devour The Day will be playing the entire tour. Akron, OH’s Red Sun Rising will provide support for dates in Europe and Russia. Additional information about the tour is available on the band’s website: http://www.skillet.com/tour.

Skillet has cemented its place as one of the 21st century’s most successful rock bands. Selling more than 11 million units worldwide, the Wisconsin quartet have received two GRAMMY® Award nominations and won a Billboard Music Award for the platinum-certified Awake. Their double-platinum single “Monster” is “the eighth most-streamed rock song of 2015” with a total of 57 million plays (and counting) on Spotify and would earn the distinction of becoming “the best-selling digital single in the history of Christian Music.” 2013’s Rise bowed at #4 on theBillboard Top 200 upon release, received resounding and eclectic acclaim from the likes of USA Today, New York Times, Revolver Loudwire, etc. and was recently certified gold by the RIAA.