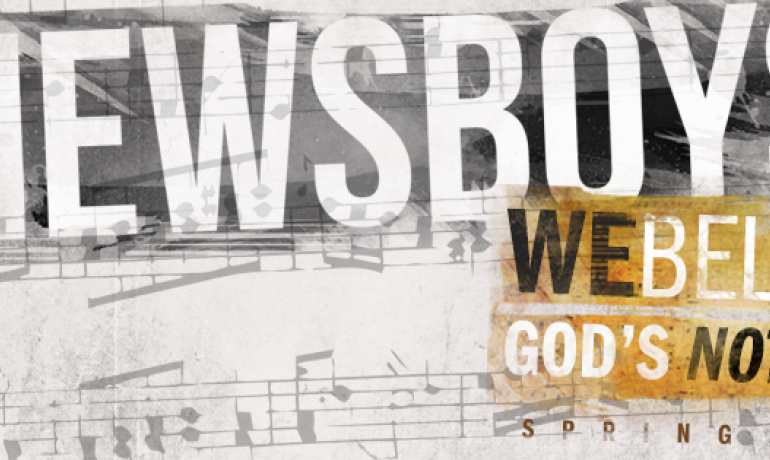 Nashville, TN — On the heels of the “We Be Believe…God’s Not Dead" 2015 Spring Tour, which saw over 30 sellouts across the country, best-selling GRAMMY®-nominated mega group Newsboys will hit the road again this fall to continue the popular tour, it was announced today. Featuring Dove Award-nominated FairTrade Services pop/rock band Hawk Nelson, along with special guest GRAMMY®-nominated Gotee singer/songwriter Ryan Stevenson, Newsboys’ “We Believe…God’s Not Dead" 2015 Fall Tour is slated to visit more than 40 cities.

Presented by Food For The Hungry, the tour launches September 18 in Las Vegas and will hit Los Angeles, Dallas, Seattle, Portland and Tulsa, Oklahoma, among numerous other cities, before concluding December 13.

Renowned for their high-energy live performances, Newsboys will once again showcase a string of iconic hits during the tour, including their longest running #1 single to date, “We Believe.” Garnering a K-LOVE Fan Award earlier this week for Song of the Year, “We Believe” was also nominated for a 2015 Billboard Music Award and is the theme song for Pure Flix’s recent film, “Do You Believe?”

Powerhouse pop rock band Hawk Nelson has won the hearts of thousands since its debut release in 2004. Hawk Nelson released their new studio album Diamonds (FairTrade Services) in March to much media praise and acclaim. The album’s first radio single, "Drops In The Ocean," is currently No.1 on the Billboard Christian AC Indicator chart—the band's first time atop any Christian adult contemporary chart. In addition, the song spent four weeks at No.1 on the Billboard Christian Hot AC/CHR chart. Hawk Nelson has released seven studio projects and has been awarded two Canadian GMA awards and multiple GMA Dove Award nominations, as well as a JUNO nomination. The band's music has been featured on NBC, MTV, WB, WGN, KTLA, Nickelodeon and the NFL Network. Hawk Nelson is Jonathan Steingard (vocals, guitar), Daniel Biro (bass), Micah Kuiper (guitar) and David Niacaris (drums).

Ryan Stevenson’s latest single, “Not Forgotten” (feat. TobyMac), topped Billboard’sChristian Hot AC/CHR chart for two consecutive weeks earlier this year, marking his first #1 as an artist and second as a writer. He co-penned TobyMac’s “Speak Life” and was nominated for a 2014 GRAMMY® Award for the multi-week chart-topper, a song Stevenson also recorded on his Gotee debut, Holding Nothing Back EP. He has toured with TobyMac and Audio Adrenaline, among other artists, and was featured on Air1 Radio’s Positive Hits Tour last year. Stevenson’s first full-length Gotee recording is slated to bow this fall.