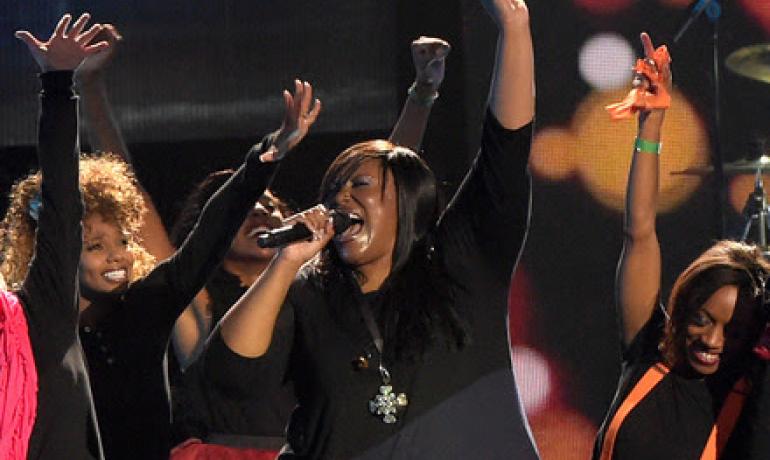 Nashville, Tenn.  – The 45th Annual GMA Dove Awards took place last night at Lipscomb University in Nashville and, once again, Mandisa was a highlight of the show. Mandisa entered the night as one of the most nominated artists – alongside host Lecrae, Artist of the Year Hillsong UNITED and Matt Maher – and was the previous year’s winner of the 2013 UPLift Someone Award.

Taking the stage with the Cantinas Dance Project out of California, Mandisa performed her No. 1 hit “Overcomer” for an excited Dove Awards audience. Immediately following her performance, Mandisa was awarded her first career Dove Award for Pop/Contemporary Album of the Year for Overcomer.

"I am very thankful for this," said Mandisa. "I think back to eight years ago, and American Idol, and I was convinced that I was being kicked to the curb. I didn't know what to do, but I'm a living witness, if you seek first the Kingdom of God.”

Overcomer has already proven to be Mandisa’s best work, having picked up a GRAMMY® Award earlier this year for Best Contemporary Christian Music Album. The title track, which earned its own GRAMMY®, remained at No. 1 for 12 weeks, was performed on ABC's Good Morning America, features a star-studded music video and has nearly 4.5 million views on YouTube. The album also propelled Mandisa to win the Female Artist of the Year and Song of the Year (“Overcomer”) awards at the 2014 K-LOVE Fan Awards.

Just last month, Mandisa debuted her first full-length remix album, Get Up: The Remixes. The project features 11 remixes of her biggest hits - including "Overcomer," "Stronger" and "Good Morning." Mandisa is currently on the “Thrive Tour” with Casting Crowns and Sidewalk Prophets. To see if Mandisa is coming to a city near you, visit mandisaofficial.com/home/tour.