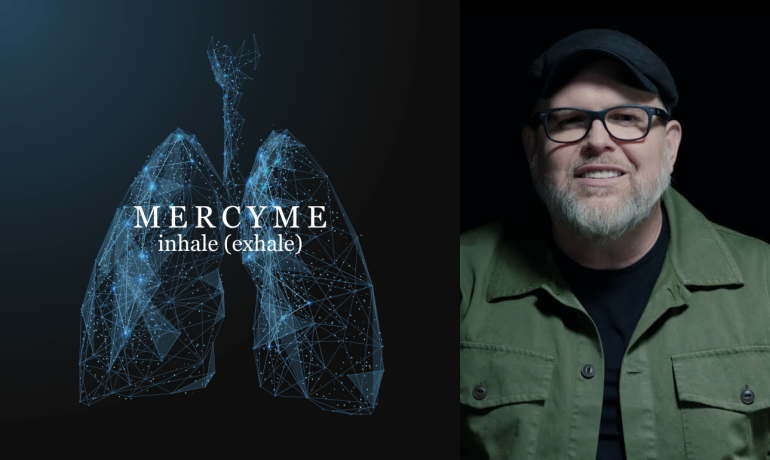 Nashville, TN - GRAMMY® nominated, multiple American Music Award, Billboard Music Award, and Dove Award-winning band MercyMe is set to release inhale (exhale) on April 30, and it is available across all DSPs for preorder today. In anticipation, MercyMe is also releasing a new instant grat track and lyric video for "On Our Way," featuring Millard's son Sam Wesley, along with previously released tracks, "Almost Home," "Say I Won’t," and "Hurry Up & Wait."

The fast-rising current radio single “Say I Won’t,” which is currently #7 on the Billboard National Christian Airplay chart and #9 on the Mediabase Christian Audience chart, is spinning on a vast majority of Christian radio stations across the country – including KLOVE, SiriusXM The Message, KLTY/Dallas, KSBJ/Houston, Z88.3/Orlando, WGTS/Washington DC, The Fish/Atlanta, The Joy FM/Tampa, KTIS/Minneapolis, and JoyFM/St. Louis. The track is a potent declaration of faith and perseverance colored by tragedy. Gary Miracle, a longtime friend that worked with MercyMe for many years, contracted an infection that resulted in having both his arms and legs amputated. His indomitable spirit in the face of such challenges was inspiring. Good Morning America's third hour, GMA3, will be featuring MercyMe and Miracle in a special segment on April 15th. FoxNews.com originally premiered the song's powerful music video last December.

inhale (exhale) is the latest chapter in MercyMe's creative adventure, and Millard admits this one was a long time in coming together. “It was two years and one month to the day that we started writing for this new record until we finally finished,” Millard says. “‘Almost Home,’ which is the first single, will be out a year and a half before the record releases. We would have had it done a year or so ago, but when the pandemic hit, it slowed everything down. We practically re-wrote the album two or three different times.”

The band began writing and wound up with more than 40 songs. Millard admits having the new record to focus on offered a welcome sense of purpose during pandemic life, and the opportunity to inhale (exhale). “It’s been a lifesaver working on this record during the pandemic when you can’t do shows and everything else. I love being with my family but I think my wife is like, ‘Yeah you function better when there is an outside purpose going along with this.’ I agree,” he says with a laugh. The pandemic—as awful as it’s been—has been amazing for our family, just getting to spend so much time together. It’s been such a scary place, but at the same time, it’s been great to have this much time with family, to push pause, and not have a deadline. Everything has stopped. That’s a crazy feeling and after a few weeks or a month of me freaking out like, ‘What’s going to happen?’ I realized that we’re all freaking out together. Music has been put on hold and so once I realized that I kind of let go and started enjoying the fact that some days my most important decision was what flavor of ice cream I’m getting with my youngest daughter."

“One reason we’re calling the album inhale (exhale) is we all just want to sit back for a second and take a deep breath and be like, ‘Okay this is what matters. This is what matters,’" Millard concludes. "I’m grateful that messages like that seem to resonate with people on a consistent basis because there is hope in that, and if they can still get fired up about what’s to come then not all is lost.”