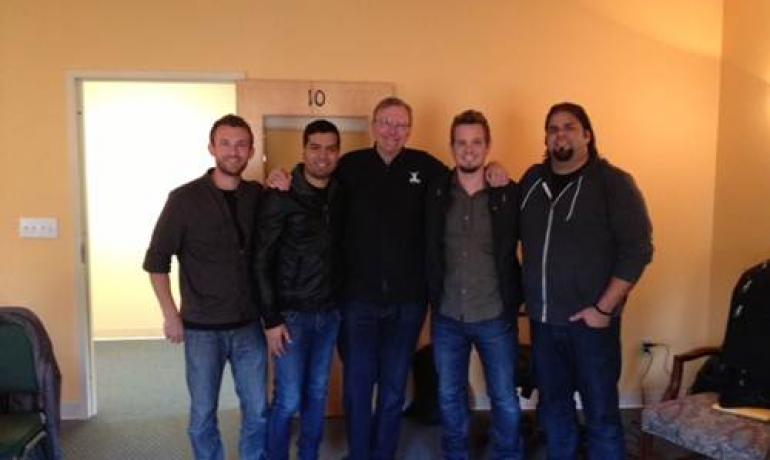 Nashville, TN — Since Unspoken released their Centricity Music debut EP, Get To Me, they have been making a strong impact with Christian radio and fans around the country. Their single, Who You Are, which released in June, is currently #15 on the CHR chart, #26 on AC Indicator, and #30 AC Monitored. Major stations such as KLOVE, Air1, KSBJ/Houston, TX, KTIS/Minneapolis, MN, KFSH/Los Angeles, CA, New Life Media, Way FM, KLJY/St. Louis and WBSN/New Orleans, LA are already on the song

Unspoken had that same impact with their live debut at Momentum 2012 where the appearance was hailed as the premiere performance of the event. Even other Christian artists were blown away by the song and performance with Jamie Grace tweeting, “omg I love that song;” Blanca/Group 1 Crew, “Just listened to Unspoken here at Momentum conference in Disney and they’re amazing!,” and Dara Maclean, “Killer chorus guys, love your sound!” The performance is also receiving positive online reaction at YouTube where the song has been viewed over 150,000 times with fans exclaiming….When you feel a song so deep you get goosebumps!, Good harmony, Good singers, Good Message. What more do ya want in a song?, And thank you Air 1 for playing this song and of course Unspoken for writing this song!

Unspoken’s music ministry is also leading the group to help recovering addicts through Celebrate Recovery events. The band has been active participants with the organization for the last few years, after lead singer Chad Mattson began sharing his testimony on how Jesus helped him to overcome his drug and alcohol addiction. Last weekend, Unspoken was invited to the first Celebrate Recovery One Day event in the state of Maine, where the group led worship and performed Recovery, a song inspired by Celebrate Recovery. While in Maine, the band met Celebrate Recovery’s President/Founder, John Baker.