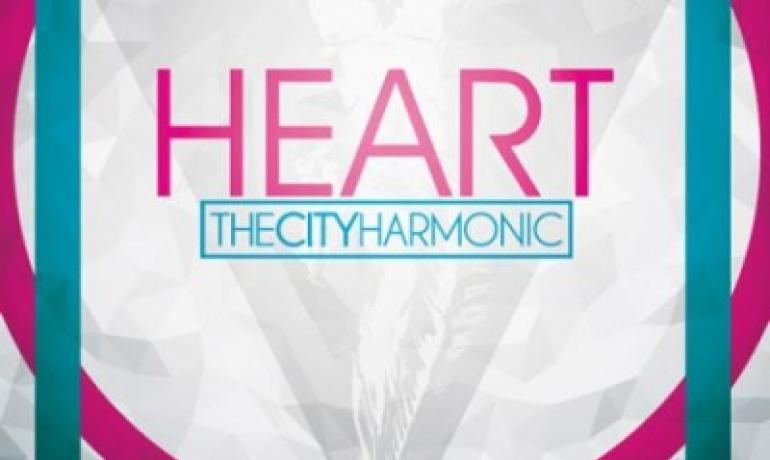 Internationally acclaimed band, The City Harmonic, is set to release globally its highly anticipated sophomore album, Heart, September 3 through Integrity Music. The 14 songs on Heart are underscored by the cinematic and communal aesthetic prominent in all of the band’s music while building from where the band left off with its widely acclaimed, JUNO Award-winning I Have A Dream (It Feels Like Home). Reflecting life lived by the band members since their full-length debut, the new album shifts from the dream of what could and should be to the complexities of how to follow the true humanity of Christ’s example in the world.

Co-produced by the band - vocalist/songwriter and pianist Elias Dummer, bassist Eric Fusilier, guitarist Aaron Powell and drummer Josh Vanderlaan - and Jared Fox, Heart places Christ at the center while delving into themes of grace, discipleship and being, and becoming, truly human, all the while giving the listener permission to sing out in hope, in hurt.

“We set out to write an album ‘on being, and becoming, human,’ but, in a way, it’s about image bearing,” says Elias. “By that I mean that yes, we’re human — and the Bible tells us that we’re made in the image of God and each and every human has an inherited dignity as a result. But there’s more to it than that…God made this universe around us and often refers to the cosmos as a temple. I mean if you stop and think about the role an ‘image’ or ‘statue’ might play in a temple, you begin to see that we humans have quite a role to play. Whatever our present circumstances, the biggest challenge before us is to recognize that in Christ we’ve been given the responsibility and capacity to become like Him, and as we do, we are becoming exactly the kind of humans we were meant to be from the beginning.

“People have always talked about ‘the square’ representing the physical, the tangible, and the circle representing the spirit, God,” continues Elias, making reference to the new album cover artwork. “How do you square the circle? How do you make these things connect? Jesus was the perfect man and God. Only in Jesus do we have the ability to say, ‘I’m a whole person, not a broken apart thing, whole but broken.’ On Heart, we try to unpack what it means to be fully human.”

At the core of the new album is the first radio single, “City on a Hill,” which is steeped in the Beatitudes found in Matthew 5.

“‘A City On A Hill’ takes the high concept view of Christ and brings it down to earth in the form of the very things he said in the Sermon on the Mount,” says Elias. “It also forms a natural transition into the balance of the album which attempts to marry the ideals with our real lives.

“In Christ, God has given us the perfect example to live by, and the means to live that way,” adds Elias. “For the Christian, discipleship isn’t simply adding knowledge to our lives, but it’s to become increasingly more like the human example we’ve been given – to become ‘little Christs,’ and carry our cross through the mud and mire of a broken world in the knowledge that by the grace of God we arise brand new.”

In the past two years, life has hit The City Harmonic ‘square on.’ They went from working day jobs to recording and touring full time. Aaron had his first child, Josh was married, Elias had his fourth child and Eric was diagnosed with cancer. In a very real sense, life set the context for Heart.

One of the songs on the album, “Strong,” written by Elias and Eric, grew from a place of vulnerability in the middle of Eric’s battle with cancer. “I wasn’t really in a place to write anything,” Eric confesses. “Emotionally, I felt like a child who had been let down by his parents for the first time. I just couldn’t see [my illness] as a blessing. I couldn’t connect with God. To confront that stuff and write, ‘I am strong in my weakness,’ was really difficult because I couldn’t deny how I really felt...”

Near the one-year anniversary of the stem cell transplant that saved his life, Eric’s cancer is in remission. “Being on the other side of it, my emotions now line up with what I believe. God really has been there the whole time, using this for the good. It’s a clear picture of God’s people coming together, working together... a profound experience.”

With Eric planning to rejoin the group on the road, having been sidelined since his cancer diagnosis early last year, The City Harmonic launches their headline tour with special guests Shawn McDonald and The Royal Royal in October. Watch the recently relaunched site, www.thecityharmonic.com, for all the latest tour dates and more as the band is about “getting people in on the act—hearts pounding and feet moving.” Listeners continue to resonate en masse, instinctively joining the chorus while the band’s music dynamically bounces from sparse intimacy to soaring celebration and back again.

Forming nearly three years ago, The City Harmonic went from anonymity to widespread acclaim, headlining tours across North America and gathering numerous awards along the way. In addition to the Juno Award, the band has a Gospel Music Association (GMA) New Artist of the Year Dove Award nomination, four GMA Canada Covenant Awards and nearly 3,000,000 YouTube channel views. The band’s “Manifesto” has sold well over 100,000 copies, marking the only song from a new artist in 2011 to break into the top 10 of the SoundScan Top Current digital singles sales chart.