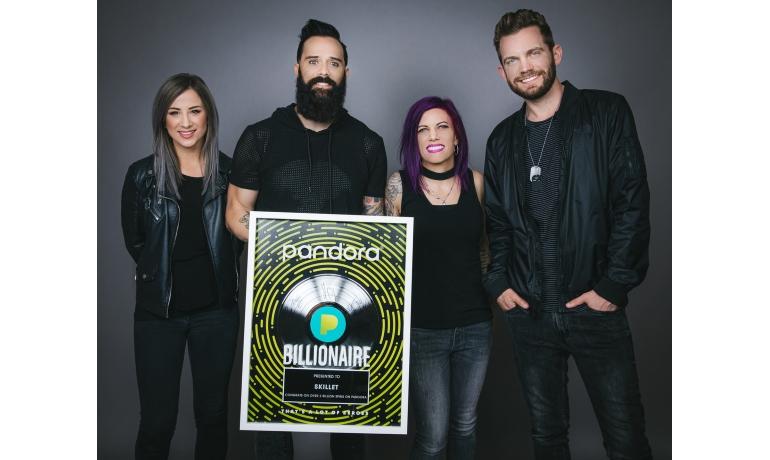 Nashville, Tenn. – Certifications continue to roll in as Skillet gears up for the debut of their newest Victorious (Aug. 2, Atlantic Record). The multi-platinum selling super group joined Pandora's Billionaires club with over two billion streams. The rarity is reserved for those totaling over a billion spins on the popular platform throughout an artist's career. The distinction places them in the company of other Pandora Billionaires like John Legend, Fleetwood Mac, Keith Urban and more.

“Skillet is without peer in the world of fist-pumping, faith-informed rock, a rare kind of band that shatters stereotypes and marketing plans, while tapping into emotional DNA of people from all walks of life, believers and skeptics alike," shares Pandora’s Programming Curator Melissa Riddle Chalos. "It’s phenomenal to see the success of a band that, 23 years in, continues to delivers hope on a sonically relevant scale.”

In anticipation of their tenth LP, Skillet is unveiling two more instant grat songs - “Anchor” and “Save Me” - on all streaming platforms today. Billboard originally announced the brand new 12 track collection from the multi-platinum selling group. The first single, “Legendary,” is impacting rock radio and has amassed nearly 7 million views on YouTube. "Anchor" will impact Christian radio.

Another new track, “Dreaming of Eden,” will be available upon release by purchasing a pre-order of their upcoming graphic novel Eden. Powerhouse Z2 Comics is publishing the graphic novel which looks to tell Skillet’s story, that of unlikely heroes, perseverance and faith. Publishers Weekly recently caught up with frontman John Cooper where he shared more about the inspiration behind his recent brainchild. To pre-order the book before it is available this August, click here.

Starting Aug. 11, Skillet is joining Sevendust on tour through Sept. 7 followed by their European tour kicking off on Nov. 6.