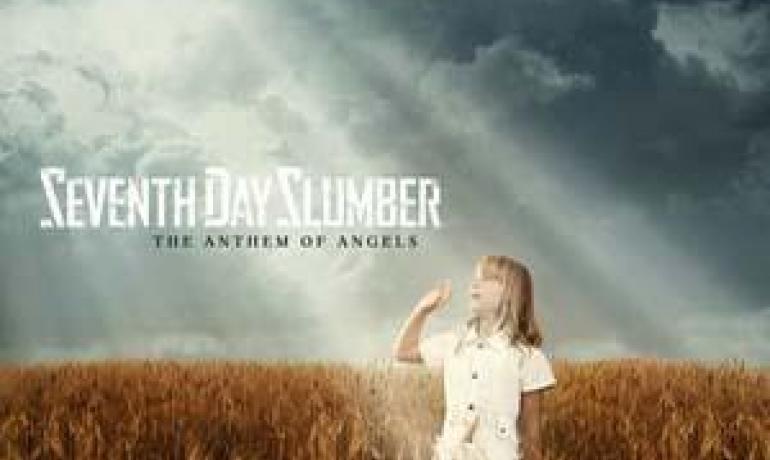 Seattle, Wa –  Since 2005 when Seventh Day Slumber signed to BEC Recordings, they have not only found chart success and a string of top ten singles, they’ve seen the power of music and the gospel to change lives. This fall, the band will release their eighth studio album, The Anthem of Angels, on November 15 on BEC Recordings. Frontman Joseph Rojas states that this is one of the band’s most honest records they’ve made in their career.

“We’ve opened ourselves up more, and been vulnerable. On this record, we pull no punches,” shares Rojas.

Honesty and candor have been trademarks of Rojas’s path from the depths of a cocaine-fueled suicide attempt through miraculous salvation in the back of an ambulance to the top of the Christian music charts. Seventh Day Slumber has long been heralded as a band that refuses to sugarcoat the struggles of real life. As the band has matured over the last 15 years, they’ve faced new-found challenges head on, and today their perspective and relevancy are as strong as ever, and their anthems of praise are even more profound.

The debut CHR radio single, "Love Came Down," is currently going for adds and is New and Active on the National Christian Audience chart. This song was written about trusting God even in the middle of overwhelming circumstances. In addition at Rock radio formats, the single “Never Too Far Gone” is also currently going for adds.

“I've struggled in my own life with feeling like I couldn't hear the voice of God clearly, especially in the middle of stressful situations,” states Rojas. “You may not be able to hear God as clearly as you would like to at times but you should take confidence in the fact that Your God is always in control!”

Seventh Day Slumber fans love to sing along with their music, perhaps because it’s so meaningful to them, and, as Rojas promises, “The Anthem of Angels has so many songs you can sing along to. You’ll hear catchy melodies and hooks and big riffs. From beginning to end, it’s a full rock worship experience.”

Seventh Day Slumber will take this full rock worship experience on the road this fall as they headline their own tour along with opening acts Southbound Fearing and Cory Lamb. The “Small Town America Tour” will begin September 3 in North Carolina through November.