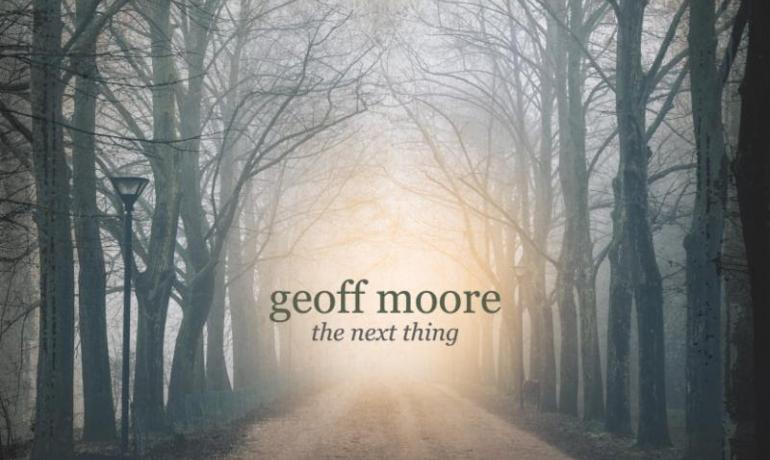 NASHVILLE, Tenn.: Contemporary Christian music legend Geoff Moore has announced the release of his long awaited and highly anticipated CD, The Next Thing. The multi-Grammy nominated Dove Award winner's new project is slated to release on September 2, 2016 on the Right Angle Music label. The digital CD is available for pre-sale today through Moore'swebsite, geoffmoore.com, and on iTunes. A prolific songwriter and touring artist, Moore has joined the rising tide of A-list recording artists who have made the leap from major label to independent status, and he is thrilled with the freedom that shift has provided. No longer shackled by corporate mandated deadlines, Moore has the elbow room to create without compulsion. That means fans have had a five-year wait for his new project, but The Next Thing is definitely an album that is worth the wait.

"When I was recording with major labels, it was the protocol to turn out a new album every 12 to 18 months," Moore says. "But since I've been an independent artist, things are much more relaxed. I don't feel the need to make an album just to make it. Instead, I have the freedom to write songs as I'm inspired. When I get a collection of songs that I feel is compelling enough, that all interact together, that's when I know it's time to make an album."

Moore points to a quote from Oswald Chambers as the inspiration for the title cut of the new CD, and as the thread that ties the songs on the album together.

"I've had this phrase in my heart for many years, and it has become something of a motto for me," Moore explains. "Oswald Chambers said, "Trust God, and do the next thing." I think most of us look around at the world and it often appears to be senseless; it breeds uncertainty about the future. That is not how I like to live. I like to have a plan. I like to know what's ahead. But the past 40 years of my faith journey has basically been me walking with God on a need-to-know basis. Ultimately, it comes down to living a life of faith. What I have learned through it all is that God is trustworthy. We can trust Him with our future. That is the message that kind of trickles down through the whole album."

That message is nowhere more evident than on the title cut, a rootsy, Americana tune that isn't afraid to ask questions without the expectation of an answer. I used to the think the wisest man knew what this life would bring/ but now I see the wisdom in trusting God and doing the next thing, the singer/songwriter croons. "Often in our eyes, wisdom is viewed as knowing how to anticipate what is ahead, be it financial, political, or spiritual," Moore confesses. "I don't know what tomorrow holds. This song is about trusting God not only with all the big stuff, but with all the small stuff, all the details."

Moore points to "Your Way Out" as another example of remaining faithful to the calling on your life, even when you can't see the outcome. "I'm at an age where I have walked with a lot of people who have gone through some hard stuff," he says. "And we've walked through our own layer of hardships. We've lost people that we love. I know what that feels like. This song is about those times when we are stuck, when we are in the weeds, when we are discouraged or hurt, when we want to hide in a corner and lick our wounds. What I have discovered is that the road to healing is the exact opposite. This song was birthed from watching people who give and serve in the midst of their darkest hours. It's about people of faith who followed God in the dark moments of their lives, even when the easy way would have been to run and hide."

"Lights in the Desert" is a song that was birthed out of Moore's personal experience ministering in the Middle East. "I've done a lot of work with ex-pat churches in that part of the world," he says. "I was driving through utter blackness one night to meet some people in the desert, and I could see their campfire burning from miles away. It reminded me that a little bit of light goes a long way in a dark place. It is a remarkable life that so many of these people are living, and I wanted to write a song for them."

A collaborator at heart, Moore called on the talents of his friend and frequent co-writer, Don Chaffer (Waterdeep), to produce the project, and Chaffer and Moore joined forces to co-write nine of the album's ten songs. The list of album credits includes background vocals from veterans like Sandra McCracken and Derri Daugherty (The Choir), along with relative newcomers like Jillian Edwards. Steve Hindalong (The Choir) supplied percussion, while Matt Slocum (Sixpence None the Richer) added cello and strings. Geof Barkley, a former member of The Distance, handled keyboard duty.

Moore employed the Kickstarter crowd-sourcing business model, shattering his goal by nearly 30 percent, and raising almost $40,000 to fund the project.

Moore will be touring the project later this Fall, then again in the Spring of 2017. The roots-oriented acoustic show will feature Marc Frieden on guitar.