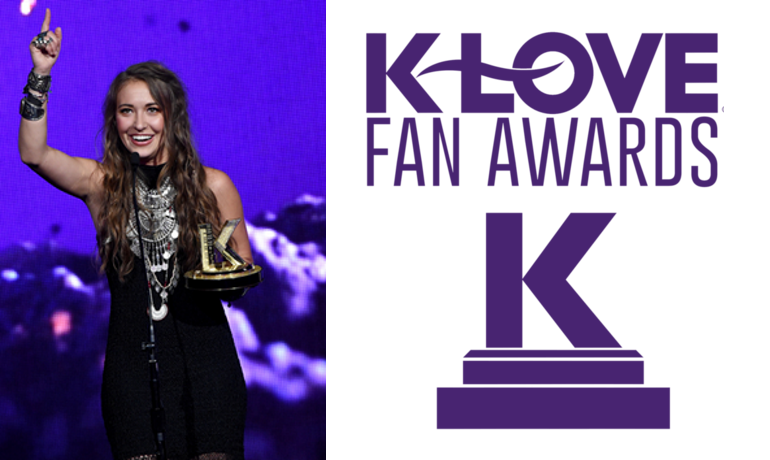 Los Angeles, Calif.: Centricity Music artist Lauren Daigle received top honors as “Artist of the Year” and “Female Artist of the Year” at the 4th Annual K-LOVE Fan Awards. Walking away with the evening’s most prestigious award, Daigle took the stage for a special duet rendition of “Meant To Live” with Switchfoot and performed her K-LOVE nominated “Song of the Year” for her No. 1 hit, “First.” The fan-voted awards show took place on Sunday, June 5 at Nashville’s iconic Grand Ole Opry House and was sponsored by Coca-Cola Bottling Company Consolidated and hosted by Elisabeth Hasselbeck and Matthew West.

“K-LOVE Fan Awards have such a special way of bringing us all together,” says Daigle. “I love that the gap between artists and fans gets smaller and smaller when we unite arms and share smiles. I'm so thankful for the fans who love me as I am even if I give the wrong acceptance speech for such an honorable award. It never ceases to amaze me. I'm so honored by K-LOVE and grateful for the opportunity to share the love of Christ by linking arms with them. This night will go down in the books!”

“The K-LOVE Awards continue Lauren’s amazing journey!,” says Steve Ford, General Manager for Centricity Music. “To have her win ‘Female Artist of the Year’ and ‘Artist of the Year’ 14 months after her debut release is mind boggling to me. I don’t know of an artist that has achieved so much is such a short period of time. I know everyone at Centricity Music is so proud of her. The awards are really great, especially since they are voted by the K-LOVE listener, but even more importantly is to see how God is using Lauren to impact lives through the songs that K-LOVE is playing.”

Daigle has steadily positioned herself at the top of the charts since her debut full-length album release. Her singles “How Can It Be” and “First” both reached #1 on the iTunes Christian Songs Chart and #1 on the Christian Digital Tracks Chart, with “First” also reaching #1 on the NCA radio chart. “Trust in You,” which earned Daigle her first No. 1 single spot on Billboard’s Hot Christian Songs chart in March 2016, continues to hold its top spot after 11 consecutive weeks, while also remaining in the #1 position on the NCA radio chart for nine consecutive weeks. The song currently holds the #1 position on the iTunes Christian Songs Chart and the Christian Digital Tracks Chart.

How Can It Be has logged more than five weeks at #1 on Billboard’s Top Christian Albums chart, and premiered in the Top 30 on the Billboard 200. HOW CAN IT BE also reached #1 on the iTunes Christian Gospel Top Albums Chart with more than 320,500 album sales and 813,000 track sales, positioning her as the fastest-selling new artist in Contemporary Christian music in the past decade. Daigle has had over 76 million YouTube and Vevo views, with approximately 250,000 subscribers. For “How Can It Be” alone, she has had more than 15 million views.