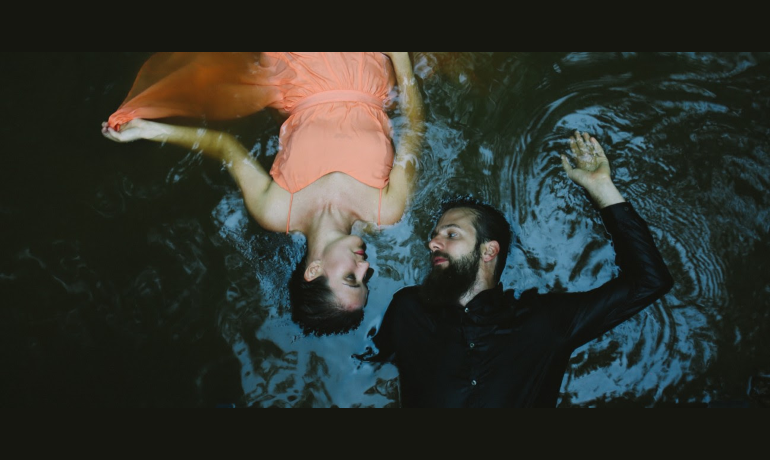 What would it look like to truly surrender without reservation, without caution, and give in fully not to an idea of God, but to God himself?

A life unfettered… fearless and free.

For Jonathan & Melissa Helser, that kind of life is not only possible… it’s the only kind of life worth living.

"Surrender is to cease resistance, yield control and give oneself up to the power of another. When you find the One your heart loves, surrender is a beautiful, effortless fall—not a duty or a task,” the couple says. “When Jesus said 'Follow me,' they saw everything they ever wanted and joyfully surrendered all they had.”

Set for release on Sept. 30, Beautiful Surrender—their 8th album and their first as part of the Bethel Music Collective—is the overflow of the life they’ve chosen, the life that God has chosen for them.

Having grown up as pastor’s kids, in “beautifully balanced families,” they married young, at ages 21 and 20: Jonathan, gifted in music and songwriting; Melissa, passionate for teaching and discipleship. They followed in their parents’ footsteps—cultivating A Place for the Heart, a multi-generational ministry, which includes The 18 Inch Journey, a 60-day discipleship school for young adults, and an artist collective, Cageless Birds. Their mission: “to craft songs, art and goods that encourage others into wholeness and freedom as children of God.”

Everything the Helsers develop together—from the camps they organize to the coffee and leather goods their staff creates to the gardens they grow, the Cultivate book series they produce, and more—arrives on wings of great intention, moment by moment, to build family, community and life. It sounds almost idyllic, almost too good to be true. But it certainly hasn’t been without its challenges.

Diagnosed at age 17 with a rare bone disease, Melissa’s health has long been a big part of the beautiful tension in their lives and in their music. “Personally, my understanding of surrender came when I was really sick. There, the true nature of God, his kindness changed my life,” Melissa says. “I always want to stay soft in my heart, even if all hell breaks loose in my life, or in my body. I cannot lose this connection, this surrender to the lover of my soul. And so I look to him to give me the courage to choose that surrender every day.”

As the couple gave themselves over to writing, teaching and community building, God began to expand their gifts. In 2014, the couple’s 7th album, Endless Ocean, Bottomless Sea, made its way to Bethel Music’s Brian and Jenn Johnson. Six months later, the two couples met up at the Bethel’s WorshipU, and a partnership was born. “We’d asked God to send us coaches, people to come alongside us and help us grow,” Jonathan says. “Part of the answer was connecting to Bethel, who just wanted to sow into what we’re doing, so our music wouldn’t get lost in the middle of everything else we have going on.”

From the opening of the title track to the very personal and poignant closer “Catch the Wind,” Beautiful Surrender features 11 originals and a bonus remix of the Dove Award-nominated “No Longer Slaves,” all co-written by the couple in tandem with the day-to-day outreach at their schools. It is a life-process and not always easy, the couple agrees, but it is the ongoing cultivation of truth and joyful response to the redemption, grace and kindness of Jesus.

“We don’t really have a formula for writing songs,” says Jonathan, who is Dove-nominated for both “Song of the Year” and “Worship Song of the Year” in 2016. “Everything comes out of the overflow of pursuing Him, in moments of worship, in valuing each other and letting each other speak. Had I not chosen to give myself over to teaching/leading these schools, to seeing these students and myself find freedom from fear, I never would’ve written ‘No Longer Slaves.’ Home is where you have to live out what you preach about, and I want to live out the songs we’re singing.”

Initially written as a love song for her brother’s wedding, the title track popped into Melissa’s head when the couple was gathering songs for the new record. “I started singing the chorus and just knew I wanted to sing it to Jesus.” With just a few lyric changes, the Helsers knew it was right for the album. “Some of the best worship songs are love songs because that’s where the connection is,” she says. “This one is such a joy bomb. It’s the anthem of what we do at our school, and it’s the love story between God and mankind that never gets old.”

“Find Me,” a simply stunning ballad that almost didn’t make the record, resonates with anyone searching for a new depth of connection with God. Jonathan explains: “To us, worship isn’t a genre of music. It is a position of the heart. In Greek and Hebrew, it means to bow low and press your face against the earth. When we do that, like the lyric says, ‘our heart rises over our head.’ Returning to that place of our origin where God found us in the dust and being found again and again.”

“Catch the Wind” was written by Melissa a couple of years back in the midst of a physically arduous season. Awakening in pain, she asked the Lord to lift the heaviness and give her relief. In that moment, she says, “I felt like he said, ‘I want you to sing your way out. So I started getting ready, and I began to sing ‘I am strong and full of life,’ and I felt immediately lifted.” Two years later, working with Ed Cash in the studio, Melissa would encounter the presence of God again in the song.

“I’ll never forget the moment when we were writing the bridge,” she says. “Ed entered the story of when I wrote it. He kept saying, ‘Where is that moment when you sang out loud?’ He could feel that breakthrough moment for me. Ed encouraged and challenged us to go deeper, and those moments are tattooed on my heart.”

In these and all the songs on Beautiful Surrender, Jonathan and Melissa’s collective and unexpected stories merge into one unforgettable soundtrack for the 18-inch journey of our lives.