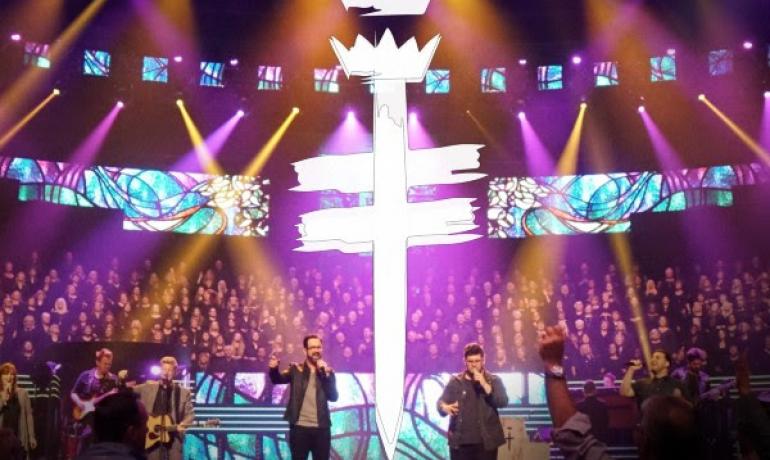 Integrity Music announces the September 23 global release of Songs of the People, a new album from Prestonwood Worship, the music ministry of the 42,000-member Prestonwood Baptist Church, which has two locations in the Dallas area. The project features all new songs from Prestonwood’s worship team led by Dove Award winning songwriter Michael Neale (“Your Great Name”) along with Prestonwood’s renowned mass choir and special guests Paul Baloche and Michael W. Smith.

The 13-track project, which was produced by Michael Farren (AllAboutWorship/Pocket Full of Rocks), will be available as a physical CD/DVD, a digital album and a digital deluxe album with bonus video content.

“With more than 500 worshipers on stage, we really wanted to capture the power of a unified worshiping army, shattering the darkness with praise,” says Neale of the project. “Having our good friends Michael and Paul join us in writing and leading for this project was a true gift… our prayer is that Songs of the People will be a resource for worshipers around the world to bring their offering to the King.”

According to Neale, twelve different writers came together to craft the tracks for Songs of the People so that the album reflects the move of God within the Prestonwood community, which is one of the largest Southern Baptist congregations in the world.

“I could not be more excited about the songs rising from the hearts of the worshipers at Prestonwood,” says Neale, whose own songs have been recorded by artists including Smith, Natalie Grant, Anthony Evans, Jr. and Phillips, Craig & Dean. “Our people have taken these songs in and are lifting them loudly to the Savior every week.”

“God's Spirit is moving among us with new songs of adoration and consecration,” adds Dr. Jack Graham, Prestonwood’s Pastor. “They are joyous new songs of praise and gratitude... Christ-exalting and life-changing words and melodies… truly the songs of the people.”

“The Word of God and testimony of Jesus is alive among us,” he continues. “Revival is here. Many are coming to salvation and deliverance.”

Some of the moving testimonies from the Prestonwood congregation are featured alongside the live concert footage on the Songs of the People DVD. Worship resources, including chord charts, for the new songs will be available at WeAreWorship.com and a songbook will be available through Bentwood-Benson.

Prestonwood will celebrate the release of Songs of the People beginning Thursday, September 22 as the church hosts “An Evening With Beth Moore,” sharing new songs throughout the night. Michael Neale will also share the songs on the road as he joins Paul Baloche for “LeadWorship” workshops and special nights of worship in Pennsylvania (Sept. 30-Oct 1) and California (Nov. 11-12). In addition, Dr. Graham and the Prestonwood ministers will share a “Songs of the People” sermon series based on the Psalms throughout the fall.

The complete tracklist for Songs of the People, including featured vocalists, is: