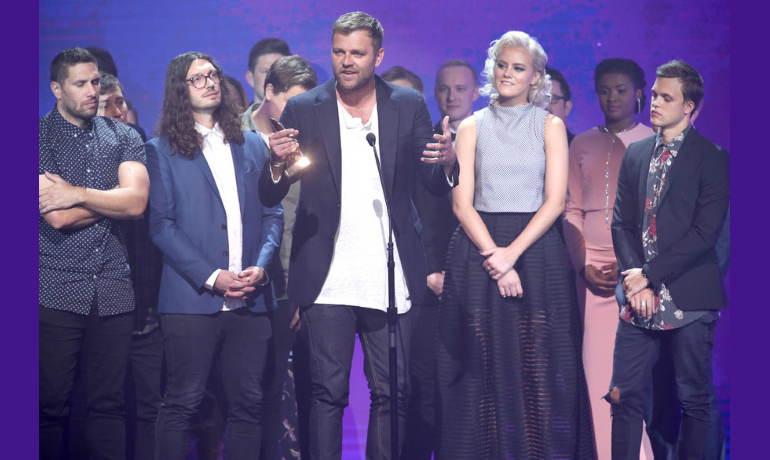 Nashville, Tenn.: Hillsong UNITED has been honored with a third consecutive American Music Award (AMA) Nomination and two GMA Dove Awards this week. The fan-fueled AMA's will take place in Los Angeles on Sunday, Nov. 20 on ABC where the band is up for Favorite Artist – Contemporary Inspirational. At Tuesday’s 47th Annual GMA Dove Awards, UNITED’s EMPIRES album garnered Worship Album of the Year and Music Packaging of the Year amidst additional nominations in major categories like Artist of the Year and Song of the Year. The 47th annual ceremony will air Sunday (Oct. 16) on Trinity Broadcasting Network (TBN).

With multiple nods for their hit “Touch The Sky,” UNITED decided to play a moving rendition of “Prince of Peace” during the 47th Annual GMA Dove Awards with Taya Smith sharing lead vocals, a change from the nominated album version where Joel Houston leads.

“We wanted to do something out of the box and use footage from our experiences this year,” Houston says referring to content played during the performance of refugee camps from the bands visit to Lebanon earlier this year. “We really hope that people take away the message of this song that the Prince of Peace can meet us anywhere.”

The version was the live stripped back version from UNITED’s latest release Of Dirt And Grace - Live From The Land, their visual project recorded live and on location in Israel. “On the same trip we were lucky enough to visit some of the places Jesus actually walked and recorded the songs from EMPIRES and a few favorites including ‘Oceans (Where Feet May Fail)’ on the Sea of Galilee.”

This week’s honors come on the heels of a full year for the 2016 Billboard Music Award winners. Alongside their summer release Of Dirt And Grace – Live From The Land, Hillsong – Let Hope Rise movie, chronicling the multi-platinum selling band's journey, debuted in theaters on September 16, along with an accompanying soundtrack streeting in early fall. In late summer, UNITED wrapped their acclaimed EMPIRES Tour in the U.S. with arena dates in Nashville, Denver, Kansas City, Chicago and more. Marking the year anniversary of EMPIRES, two-disc vinyl LP versions of the record were made available to listeners.