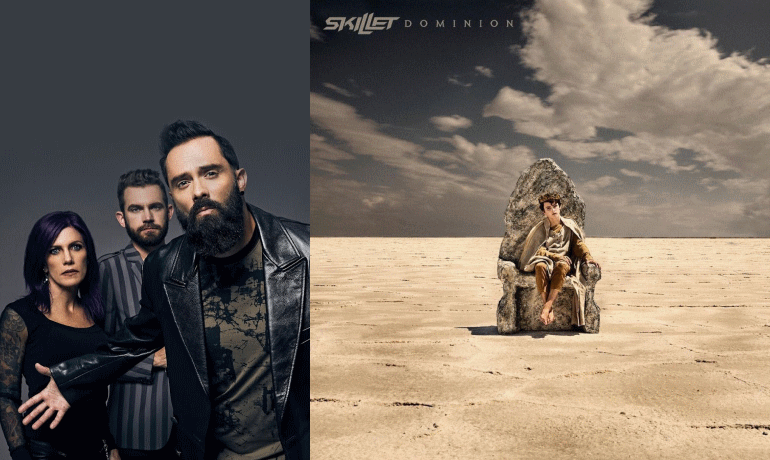 "DOMINION is about the celebration of freedom, a liberation from fear - to be who we want to be, say what we want to say, believe what we want to believe," Cooper says. "In some ways, it’s a reminder of the God-given rights that we were born with. It’s time to regain some sort of control over our lives and not be a slave to fear. I hope this record is going to make people feel empowered, inspired, uplifted, and want to rock their faces off!"

Yesterday, in advance of "Surviving The Game's" release, Atlantic Record's President of A&R Pete Ganbarg and the band's A&R rep, Andy Karp, hosted SKILLET for a performance and Q&A about the track, which Ganbarg describes as "Pure anthemic Skillet - a song that speaks to the unprecedented times we’re all facing with the ferocity that has been the band’s trademark for over two decades. It’s a fierce, welcome return.”

Cooper describes the track as "A defiant song about not giving in to the fear that the world is and has been experiencing. This song brings a feeling of survival; you have to do what you need to do to get your life back; defiance against fear and the things that want to hold you down - for so many, that's depression, isolation, loneliness, suicidal thoughts, etc. This song is about becoming the person you are meant to be and coming out on the other side of all the madness."

Earlier today, the band premiered the track's music video on YouTube. Shot in the expansive desert outside Los Angeles last month, the video is made up of a mixture of high-energy band performances alongside a storyline where a young kid rules the land, entraps the band, and they have to fight through pain and fear to make it out alive.

SKILLET is headlining 24 shows this fall with Adelitas Way as main support and Eva Under Fire. The trek, dubbed "The Aftermath Tour," kicked off September 12 to a rockin' Chicago crowd and runs through October 22 in St. Louis. A limited quantity of VIP packages are also available, including a ticket, pre-show Q&A and trivia contest hosted by SKILLET, and exclusive merchandise. All dates are below, and tickets are available via https://www.skillet.com/tour.