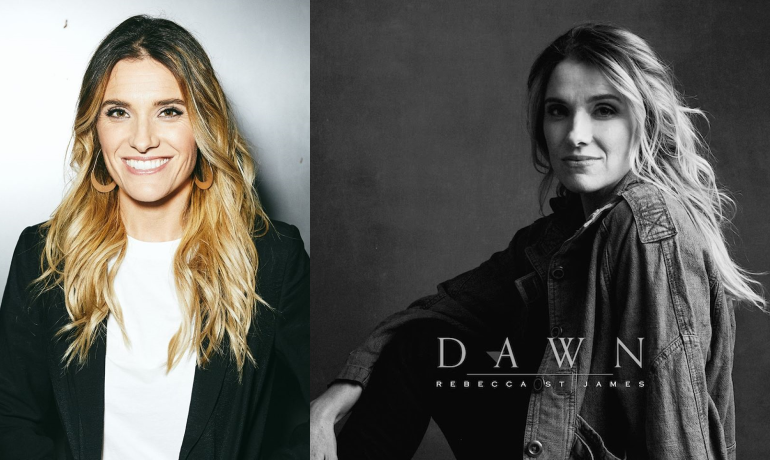 Redding, Calif.—Dawn, the highly anticipated Heritage Music debut from one of Christian music’s most lauded luminaries, GRAMMY® and multi-Dove Award winner Rebecca St. James, will be available July 24. Her first studio recording in nine years, the six-song EP reflects a poignantly personal path from suffering to renewal for St. James and her family.

“Worship just seems to be the right kind of music for me to make in this season; it’s so true to who I am and my roots,” St. James says of her return. “The foundation of the EP is the idea of dawn—a new sunrise, a new beginning, a new spring. The theme throughout is God’s redemption; new seasons of joy after pain, and hope.”

“Nearly three years ago God did a rebirth in our little family during what we would call a winter,” St. James explains. “I miscarried twice after our first daughter, and it just felt like when it rains, it pours. It was winter on so many levels—dealing with internal pain, major vocational change and unknowns, outside family issues—just a lot all at once. Then God brought about a total change in my heart and in my husband’s heart too, and we felt that He delivered us into a spring season, a renewal that started on the interior.”

Chronicling her transformational journey through each track, St. James was joined by a host of Christian music’s top writers, including Smallbone, Baldwin, Bethel Music’s Kristene DiMarco, and Mia Fieldes, among others. Highlighted by the critically acclaimed debut single “Battle Is the Lord’s,” featuring Lake, Dawn also showcases the contemplative title-cut, a duet spotlighting St. James and Smallbone’s sibling harmonies; as well as the Baldwin-featured “Middle of the Fire,” an earnest anthem of unwavering trust in His faithfulness.

In addition, the EP finds St. James in fresh, yet familiar territory with the synth-pop “Ready For The Rain,” welcoming an outpouring of the Holy Spirit; the ebullient “Fall Back,” an encouragement to find peace in the grip of His love; and the worshipful closer, “Alleluia Jesus.”

“The time away from music has helped me come back with fresh energy,” St. James says. “It’s much easier to go with a formula that feels safe or sure to be received, but I’ve not wanted to do that. I’ve really wanted this project to feel progressive but also really accessible.”

Among the most defining artists in Christian music history, GRAMMY®-winning singer/songwriter, best-selling author, speaker and actress Rebecca St. James rocketed into the global spotlight following the release of her self-titled ForeFront Records debut in 1994. The Australian native’s modern pop sensibilities and uncompromising lyrics set a benchmark in Christian music, leading a new generation of artistry in the genre.

St. James has earned multiple Dove Awards, nine #1 Christian radio singles and two GOLD®-certified recordings, and her discography includes such iconic albums as Pray, God and Transform. Author of the best-selling titles Wait For Me (Thomas Nelson) and Pure (Hachette/Faithwords), among others, she starred in the 2009 film Sarah’s Choice; portrayed Mary Magdalene in the groundbreaking rock opera !Hero; and voiced "Hope, The Angel" in VeggieTales’ best-selling DVD The Easter Carol, in addition to other diverse roles. An award-winning songwriter, St. James co-penned multiple selections on for KING & COUNTRY’s blockbuster 2019 recording, Burn the Ships, and she is also the host of Rebecca St. James Friends & Family, a weekly podcast on faith, family and community available via the Accessmore platform.

Heritage Music is an imprint of Bethel Music, the 11-time Dove Award-winning and GRAMMY®-nominated Christian worship ministry formed as an extension of Bethel Church in Redding, California. A global outreach comprising a collective of songwriters, artists and musicians, Bethel Music was named among the top record labels in Christian music last year by Billboard.