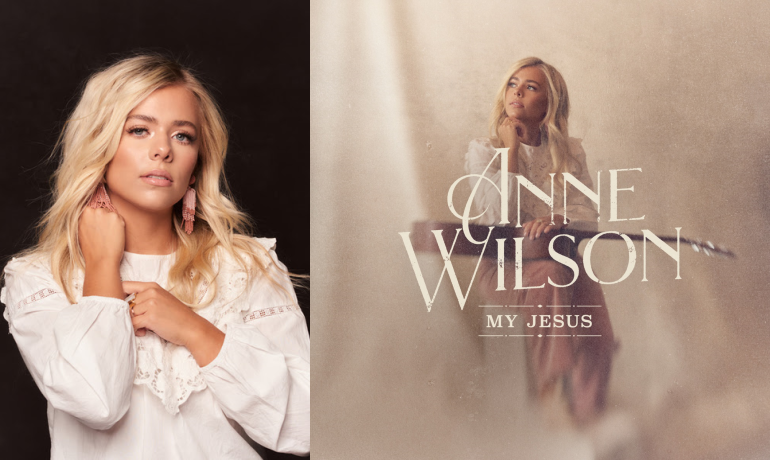 NASHVILLE, TENN. - Earlier this year, Capitol Christian Music Group's new singer-songwriter Anne Willson released her three-track digital debut single, My Jesus, which featured her breakthrough radio single "My Jesus." Wilson's My Jesus is Capitol CMG's largest debut single launch from a new artist in nearly 10 years. Her debut song is currently in the Top 15 on the AC Indicator chart and is the most added song on radio for the 5th week in a row after it received 49 adds during its debut add week. My Jesus debuted at No.1 on iTunes in the US and Russia (Christian & Gospel), No. 17 on iTunes (all genre), and the Top 15 music video on all of iTunes. It also debuted on the Top Thumb Hundred on Pandora.

The title, “My Jesus,” was literally ripped from the pages of Wilson's journal as she quickly realized that any time she wrote about her relationship with Christ, she always described Him as “My Jesus.” Co-written with Matthew West and Jeff Pardo, the song addresses how for her, Jesus is personal and a warm invitation to experience Him in the same intimate way.

The response has been overwhelming to My Jesus since it was released. With only three songs currently available, Wilson has 6.4M global audio streams to date, with 5.1M global streams for "My Jesus." The "My Jesus" music video has more than 1.6M YouTube views, 10M views, and 160k shares on Facebook and has reached No. 7 on Universal Music Group's Top 50 Music videos.

"I’ve been super surprised at the response to my single,” shares Anne Wilson. “Since I had never released any music before, I was excited and anxious. I remember praying the night before My Jesus released 'God, I've done what I can do with this song. This is up to you and whatever you want to do with the song.' I had this peace come upon me and knowing that God had a plan, no matter what happened. It's been unexpected, but it's been so incredible to see, and I'm so humbled and honored that He's using me as His vessel to spread the gospel and to remind people that they can have a personal relationship with the Lord. When I hear stories, where people are being specifically impacted by this song, it is such an encouragement to my heart because it reminds me that God has such good plans for us.

Supporting this incredible three-song single, Wilson will release a live EP, My Jesus (Live In Nashville), on August 6th featuring the three previously released songs recorded as live versions along with a new song "No Place Like Home," and a cover of Little Big Town's "Boondocks."

"It is going to be fun to share these live songs we just recorded at White Dove Barn," she states. "I'm really excited to share the new song, 'No Place Like Home,' as it is my favorite song I've written. It's about my brother Jacob and I's memories together. It's truly an incredible song that captures the times we had together as brother and sisters on my grandfather's farm. I'll always cherish those memories we have with him and I'm ready to share it with the world. I wrote this song on the same day as 'My Jesus' with Jeff and Matthew and we wrote it in about 10 minutes! It just came together so beautifully."

Although she has lived through the tragic season of losing her brother at a young age from a car accident, she is also in a new season of seeing God sustain her and her family during hard times. A story that so many can relate to and connect with her. Fans will be able to connect in person this fall as she can be seen on the Big Daddy Weave "All Things New" tour. Today she is also releasing a special live version of "My Jesus" with co-writer Matthew West from his recent West Friends Fest last month. Click below to watch the songwriters perform the anthemic song.