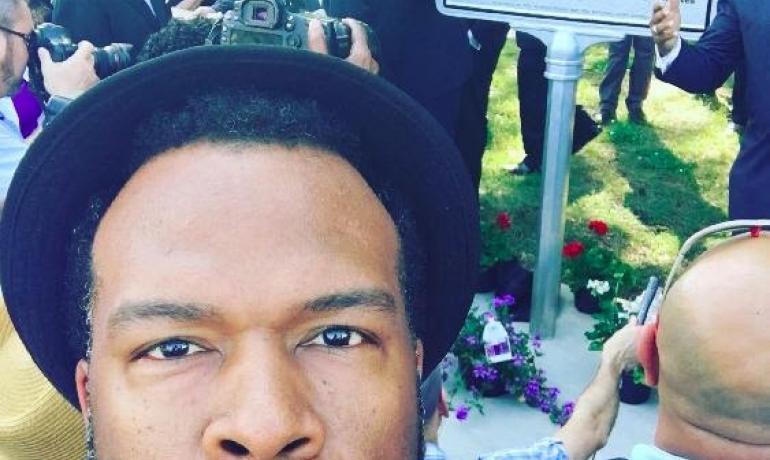 "Antonio, thank you for performing your wonderful song, 'We Remember,' during the dedication ceremony for our new historical marker that commemorates the victims of the 1866 Memphis Massacre," says Memphis Branch NAACP President, Keith Norman. "Your performance was uplifting and inspiring!"

"'We Remember' is a beautiful music video and an inspiring tribute to the victims of the 1866 Memphis Massacre," Norman continues.

A largely forgotten incident following the American Civil War, the Memphis Massacre took place in the black neighborhoods of Memphis, Tennessee, and resulted in the brutal murder of 46 African Americans and 2 whites. Outraged, Congress sent a committee to investigate and numerous witnesses were interviewed. Their accounts were graphic, horrific and heart-wrenching. While the massacre was one of the most documented events of the mid-19th century, few people today are familiar with the story. Through the Memories of a Massacre project, the National Park Service is working to bring awareness and public attention to this heartbreaking chapter of American history.

"The 'We Remember' song and video will reach countless people who would not otherwise have known about the tragic Memphis Massacre event," says historian Timothy P. Townsend, director of the Lincoln Home National Historic Site. "This powerful song and touching video will also inspire people to remember those who helped paved the way for freedom in America."

Townsend, who was familiar with Neal's music, was instrumental in introducing him to the National Park Service. The NPS, in turn, commissioned Neal to compose and perform a song commemorating the Memphis Massacre.

"A significant part of the mission of the National Park Service, throughout our 100 years of service to our nation, has been to educate the American people about their past through oral presentations and the written word," says Timothy S. Good, Superintendent of the Ulysses S. Grant National Historic Site, who sought out Neal for this project. "As we stand on the edge of beginning our second century, we seek to employ all forms of teaching. We find that we can use Antonio Neal's video and song, 'We Remember,' to honor Americans of the past, and to inspire the Americans of today, and most importantly, those Americans yet to come."

Both the "We Remember" song and the music video became something of a family affair for Neal. His daughter Summer, 13, served as the principal figure in the video, where she is seen hand-crafting each of the memorial items in the video. Neal's youngest son Chris, 17, an aspiring composer and music producer, helped with the early parts of the song and earned a songwriter credit for his contributions.

"I was inspired to write 'We Remember' while driving through one of the neighborhoods where the massacre took place," Neal said. "To know that this is the first video and song tribute of this kind ever for this piece of American history really takes my breath away, because I know that it will live on beyond my lifespan."