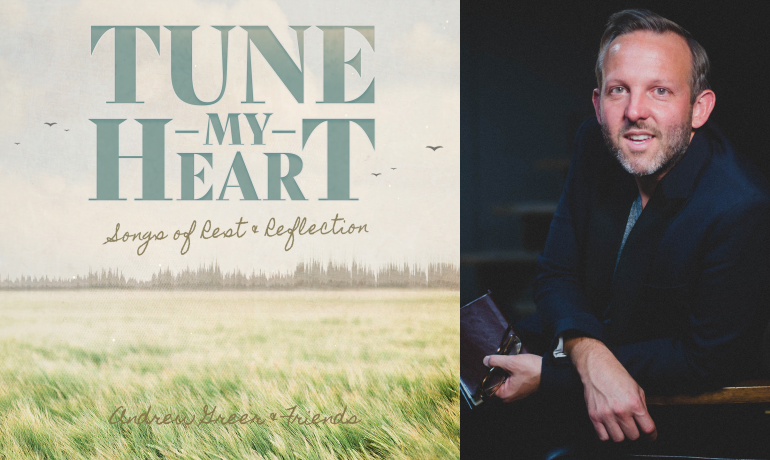 NASHVILLE, Tenn.—Tune My Heart...Songs of Rest & Reflection (Lucid Artists/MA’M Recordings), a soundtrack for personal moments of peaceful worship from Andrew Greer & Friends, is now available at Parable Christian Stores nationwide, as well as via Apple Music and other major digital platforms. Produced by Greer and Travis Patton and co-produced by Kyle Buchanan, the compilation debuted at #1 on the Parable Christian Stores National Retail chart earlier this month and is currently among the Top 5 releases on iTunes' Christian & Gospel Top Albums chart.

A collection of 12 cherished favorites and freshly-penned originals, Tune My Heart showcases Greer's collaborations with some of Christian music's most beloved artists. Highlights of the album include the African-American spiritual “Give Me Jesus,” a duet by GRAMMY®–nominated singer/songwriter Cindy Morgan and acclaimed modern hymn writer and recording artist Sandra McCracken; “What Wondrous Love Is This,” an instrumental featuring Dove Award-winning roots-gospel singer/songwriter Buddy Greene on harmonica; the a cappella “Be Still My Soul” from classical crossover vocal group Veritas; GRAMMY®-winning Gaither Vocal Band member Wes Hampton’s stirring “Take My Life and Let It Be”; and Greer’s meditative “Come Thou Fount of Every Blessing.”

In addition, the orchestral title-cut, a reflective arrangement of “Nearer My God To Thee" and the Travis Patton-penned original “Cade’s Cove” are among various instrumental selections inviting peaceful reflection throughout the project.

"When we were curating the song list for Tune My Heart, we could never have known the release would fall in the middle of such an unusual, unknown season for our families and our communities,” Greer shares. “It is my sincerest hope that these melodies and lyrics might align our spirits and tune our hearts to God— that through the pianos, the strings, the guitars, the vocals, this sonic amalgamation could embody what peace might sound like."

Greer's fourth collaboration with Parable Christian Stores, Tune My Heart comes on the heels of the Dove-nominated releases O Come Emmanuel: Carols of Christmas (2015), All is Calm, All is Bright (2014), and All Things Bright & Beautiful: Hymns for the Seasons (2013). The latter project topped Nielsen Christian SoundScan’s Instrumental chart for 25 weeks.

A six-time Dove Award-nominated singer/songwriter, producer, author and television/podcast host, Andrew Greer’s critically-lauded Angel Band recordings featured collaborations with some of the top names in bluegrass, Gospel and Christian music, including multi GRAMMY®-winners Ron Block and Sandi Patty, as well as the world-renowned McCrary Sisters, among others. Also an acclaimed author, Greer’s 2015 Thomas Nelson debut, Transcending Mysteries: Who is God, and What Does He Want from Us?, co-written with Dove Award-winning singer/songwriter Ginny Owens, was followed by the 2017 Worthy Inspired title Winds of Heaven, Stuff of Earth: Spiritual Conversations Inspired by the Life and Lyrics of Rich Mullins.

Greer is co-creator and co-host of the popular television and streaming series Dinner Conversations with Mark Lowry and Andrew Greer. The in-depth interview program debuted at #1 on iTunes' Religion & Spirituality podcast chart and has featured such acclaimed guests as Kathie Lee Gifford, Amy Grant, Scott Hamilton, Wynonna Judd, Russ Taff, Patsy Clairmont, Montell Jordan and Point of Grace, among many others.